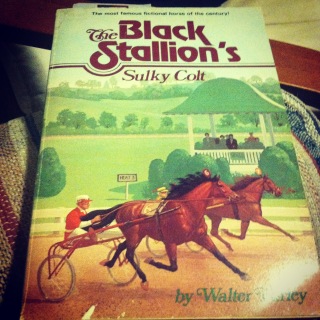 Oh, boy. I bought this for $2 at a used book store because of the cover: I couldn’t resist. Hands-down my favorite cover era for the Black Stallion books. I had vaguely positive memories of The Blood Bay Colt and Jimmy and Tom and ever-so-vague memories of this book, so this would be good, right?

Wrong. Oh, it wasn’t bad, in the way of that Island Stallion book with the aliens (YES REALLY), but nor was it a Black Stallion and Satan, or The Black Stallion’s Filly, either.

Let me summarize this book for you.

So let me back up. This book picks up after the storyline of The Blood Bay Colt. Bonfire, the second son of the Black (out of a harness mare named Volo Queen, because why not breed your nutjob mystery stallion to a Standardbred) has moved from the county fair circuit to the big time, and is prepping for the Hambletonian. One night, Alec Ramsay decides to go see Bonfire race; it just so happens that during the race he watches, Bonfire gets into a bad wreck. Thereafter, Bonfire is nervous and jumpy and seemingly ruined for harness racing.

If you’e ever read a single Black Stallion book, you don’t need me to tell you what happens next. If you haven’t, know that Alec takes over the reins and mysteriously a) is instantly an expert sulky driver and b) gets his driving license by magic after Tom is injured. Despite unexplained and bizarre prejudices against harness racing, Henry Dailey arrives on scene to save the day. Alec and Henry help Bonfire overcome his (um, totally justified) fear, thanks to a clever mechanical hood & blinker arrangement, and then win the Hambletonian. Shocking, right? (Yeah, no.)

Things that annoyed me about this book:
– all the characters who were not horses
– Henry’s bizarro prejudices
– the way Alec and Henry came into the harness racing world and never asked anyone to explain their training techniques, simply forged ahead with their own and were of course miraculously succesful
– the deification of Alec and Henry
– how poor Tom was basically turned into a demon for plot purposes
– how horrible everyone was to the horses, while outwardly talking about being gentle and easing them along and blah blah

Things that I really liked about this book:
– Walter Farley writes a racing scene second to none; all of Bonfire’s races were genuinely exciting and tense
– quirky horse antics! I never get tired of quirky horse antics in these books
– it was a short, straightforward story told relatively well

Anyone else read this one? Thoughts?