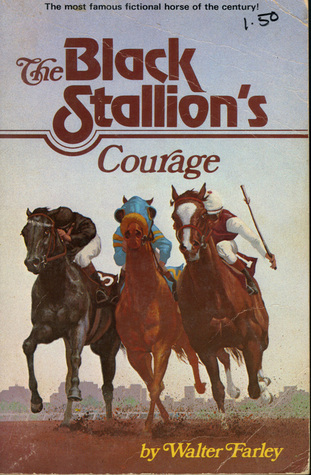 After the mare & foals barn at Hopeful Farm burns down, the Black returns to racing to win enough prize money to rebuild.

One of the hardest things about these books is the wildly divergent quality. For every The Black Stallion Revolts, there’s a Black Stallion and Satan. The pendulum swings with no pattern and no warning.

Which is how we end up here, one book after The Island Stallion Races, with a legitimately great book.

I KNOW! Rest assured, I’ve still got some snark, because there’s a lot in here that’s nuts, but honestly? I really, truly enjoyed reading it. It had interesting characters, a good plot arc, reasonable tension, and some terrific race scenes. Definitely a top 5 for me.

We open the book on Alec waking up in the middle of the night because something indefinable is wrong. He gets out of bed and for plot reasons cleans out his coat pockets before going to find out what’s wrong.

The letter was from the insurance company. Opening it he found that as of three days ago, when final payment on the fire insurance policy had been due, all the barns and other buildings of Hopeful Farm were unprotected in case of loss or damage! Furious with himself, Alec shoved the letter into his pocket. It was inexcusable that he should have forgotten to give the premium notice to his father, allowing the policy to lapse.

HERE HAVE SOME FORESHADOWING, says Walter Farley. Honestly, though, would you expect anything else from Hopeful Farm, site of some of the most bizarre business practices in the Thoroughbred industry. (See about thirty pages later, where Alec is utterly horrified at the idea that he might have to sell some horses!!! NO!!!! NOT THAT!!!!)

If you missed the big, glaring hint, the weird feeling that woke Alec up was some kind of psychic premonition that the foaling barn was going to burn down. But here’s what actually happens.

Alec has to break the news to his father that there’s no more fire insurance and the farm has suffered a $100,000 loss (at least it’s a nice round number?) but he conveniently leaves out at this moment and frankly for the rest of the book that the fire is mostly his fault.

Alec’s father is bummed out, obviously, but it’s fine, really.

“Of course, Black Minx,” Mr. Ramsay said quickly and simply. “I should have thought of her immediately. But then you and Henry have told me so little of her chances in the coming Preakness.”

HOLD ON JUST A MINUTE.

We need to have a conversation about timeline, people.

The Black Stallion’s Filly was four books ago. In between, I think we can yank The Black Stallion’s Sulky Colt and The Island Stallion Races out of the timeline because they don’t deal directly with the ongoing narrative. But you know what happened in between Filly and this book? The Black Stallion Revolts. You know, when the Black caused a plane crash and Alec wandered around the desert with amnesia for how many weeks?

Not that many weeks, apparently, because it happened in between the Derby and the Preakness! There are context clues later on that indicate that Revolts did indeed happen in that ~5 weeks (people remark on the Black’s scars, which are a major part of the narrative of Revolts, but no one mentions “that time that Alec and the Black vanished”?).

Anyway, Alec doesn’t have all that much confidence in Black Minx – he’s never been her biggest fan – so he decides the Black is going to come back to racing. Gone are all the concerns about trivial matters like “not being a registered Thoroughbred” (though I guess they got over that one in order to breed him?) and “he tries to murder other horses.” Like totally gone. Not only does no one mention them, the Black never puts a foot wrong in this entire book. He is totally devoid of personality. It’s one of the biggest flaws in this otherwise pretty good book.

Black Minx is not trending well, which is exasperating Henry, who keeps stomping around insisting that he’s going to figure out what’s wrong.

It wasn’t really the filly’s loafing through her works that bothered him. And it had nothing to do with her legs, her speed or her stamina. It was her eyes. They told him, just as if she’d spoken, that she was bored with racing, that anything after her glorious win in the Kentucky Derby would be an anti-climax. But how int he world could he have explained that to Henry?

The book continues to juggle two narratives from now on. The first is what exactly is going on with Black Minx – why isn’t she racing the way she did in the Derby? The second is bringing the Black back to the racetrack when the handicapper keeps putting more and more weight on him. A major subplot of both narratives is the three year old champion Eclipse who everyone thinks is the greatest thing since sliced bread for no discernible reason, and the five year old champion Casey.

Farley actually juggles these two narratives with a fairly deft hand, though Henry doesn’t come out of it looking like roses – mostly like an asshole who yells a lot. It moves back and forth constantly, and there’s enough racing action to balance out the endless “But whyyyyyyyy won’t Minx just run?” whining and the everyone freaking out about how much weight the Black is carrying.

A lot of the suspicions about Black Minx are weirdly gendered.

[Alec] took a large silk handkerchief from his pocket and rubbed her coal-black coat. Like a lady, she seemed to love the touch of silk, too. He had found that it pacified her more than anything else.

I feel at this point, though, that I should mention that poor Satan is basically chopped liver in the background of all of this. Seriously, you guys, you have the TRIPLE CROWN WINNER in your barn and you are so broke you need to rely on winning races to earn money? WORST BUSINESS PLAN EVER. All indications are that they’re not studding Satan out. They’re using him only on their own mares. And so literally the only horses they have that can race are Minx and the Black. Can you imagine if his owners had taken American Pharoah back and said “nah, we’re good, gonna use him on like 12 mares a year that we own personally”? NUTS.

So you see what I mean by a genuinely enjoyable book with total insanity going on in the background? Come to think of it, that’s the same thing you could say about The Black Stallion and Satan. I think Walter Farley might have a winning formula here.

Black Minx runs third in the Preakness after running a mediocre race and getting beat by Eclipse, and Alec floats his theory of why she’s not running well: he thinks she’s in love with Wintertime, a bay colt that featured in her book as a competitor. They do some experimenting over the course of the book and not to spoil you, but Alec turns out to be right. Minx won’t pass Wintertime, and she only works well when they’re worked together. He also goes off his grain when she’s stabled too far away. TRUE LOVE.

So of course Henry decides to buy Wintertime for $20,000, or almost exactly the sum of money they’ve managed to earn so far, because…they need another stud? FUCKING TRIPLE CROWN WINNER IN YOUR FUCKING BARN, HENRY.

You guys, I’ve been on the fence but I’d like to announce that I am 100% on Team Satan from now on. It started with the insane breaking and continued with the fat-shaming and the daddy issues and now he is just getting shat on by exclusion constantly.

Ugh. Anyway. While they’ve been trying to figure out Black Minx (those women, you know, you just never know what’s going on in their brains! is not too much of a stretch to read into her whole subplot), the Black has been humming along.

First, he crushes the field in a race of seven furlongs, because remember how Alec told Black Minx her sire was the best “distance” racer of all time? Oh yeah, he’s a sprinter too. But that win sets him up to carry a lot of weight in his future races, and Henry stomps around and yells a lot about how unfair it all is.

I feel like I should also mention that Casey (the champion five year old) is ridden by some kind of extra from The Quiet Man who is one of Henry’s besties.

“‘Tis likin’ the ride I gave him they are and no one else will sit on him but me. Now ’tis later in the mornin’ than I like to be gettin’ to work even for a Sunday. So please get on with you.”

Vaguely racist stereotyping aside, his name is Michael Costello and he’s kind of great when he’s not talking. Some of the best scenes in the book are him strategizing the race and being wayyyyyyyyy smarter than Alec.

There are a couple of other interesting themes in the book, like:

The book leads, as we all knew it would, to what is basically a match race between Eclipse, Casey, and the Black. It’s a GREAT race. It’s just as exciting and well-written as the Black’s original match race with Sun Raider and Cyclone. (Haha, remember them? No one else does!)

The Black wins, of course, but he’s pushed HARD to do it, both in terms of Alec’s strategy and his own physical endurance. You’re left feeling for maybe the first time ever that the Black was stretched to the absolute limit. Which is a really cool thing.

So there you have it! Maybe not as much snark as usual, but I actually had a lot of fun reading it, so there’s that.

Do you remember this book? Do you also think it’s dumb that Black Minx started refusing to race without her boyfriend? Are you on Team Satan with me?