“Strapping” is just an inherently weird and kind of funny way to describe this particularly type of house work. The internet tells me that it’s a 16th century term, a derivation of the word “strop,” and could mean either a trap for birds or a piece of lumber holding two objects together.

We are using it in the latter context, on the ceiling in the basement garage. It’s the third-to-last step before having a finished garage in the basement, and I have every digit crossed that we are on schedule for a January completion.

So. Strapping. Basically: putting up pieces of wood on the ceiling to a) hold the insulation in and b) create a level, even, easy foundation on which to attach future pieces of sheetrock.

It’s actually a fairly straightforward process. Just grunt work. Occasionally difficult to reach up and hold for that long, but then you just have to use the nail gun and bam, it’s in. Once we get into a rhythm it’s pretty fast. The downside is that I can’t do it by myself, so I have to wait for my husband to help me, which means it’s part of a larger set of house project negotiations and I can’t just do it on my day off.

The first challenge was something my dad took care of: in one section of the basement, there were 2×6 beams instead of 2×8 beams. Why? Who knows. Reasons. It meant that before we added in the strapping, we had to basically add 2″ (actually less than 2″ because no one labels wood in its actual size WHAT IS UP WITH THAT?) to have something to attach the strapping to. 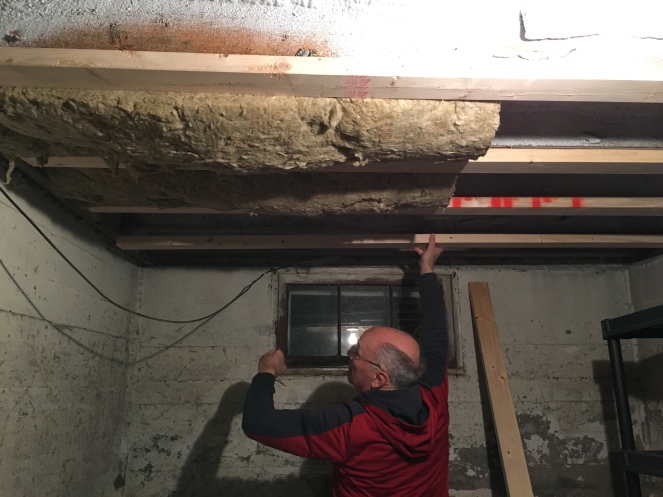 Yay that. While he was doing that, I finished doing all the other insulation. Then took a loooooooooong shower to get all that ick out of my hair. (Yes, I wore a hat and goggles and respirator and gloves…it still gets everywhere.)

Then, we did the strapping in the root cellar.

Very rare picture of me in action. I’m so sorry about the midriff. It’s a very old fleece and I am very long-waisted.

This weekend, we worked further on doing the main garage part. Once we finish that, time for sheetrock!