I don’t talk about my dog all that much but rest assured, I’m at least as obsessed with her as I am with Tristan. Hence why it’s been a difficult couple of weeks, because just as Tristan was getting better she also started getting really sick.

I had written previously that she started getting hives literally within the hour of when I arrived home after the first night of Tristan getting sick. Those hives continued all that week, coming back like clockwork when she was due for her next benadryl dose.

She was a pretty miserable little dog. Her skin was hot to the touch, and the hives were everywhere. We did lots of cold baths. I washed everything she could possibly be touching in case it was environmental. Nothing helped; by the end of that week, I made her a follow up appointment with her regular vet for the following Monday morning to talk through other options.

Well, that weekend my husband took her to New Hampshire for a few days of visiting his parents. On Saturday afternoon, he noticed a small bump on her nose, just about the size of a pimple. You can’t even really see it on this picture he took of her that afternoon.

By Sunday morning, it had opened up into a blistering sore. We treated it with a baking soda and water paste, because our best guess was that she had either gotten exposed to some particularly nasty plant or a bug bite / bee sting.

It kept getting worse.

Thankfully, we had that vet appointment on Monday, and the vet was duly very impressed. Her best guess was that it was a staph infection, so Arya started on cephilixin, a pretty strong antibiotic, and she went in a cone to keep from getting at her nose. She kept on the benadryl to hopefully keep some of the itching down. She was a really miserable pup. 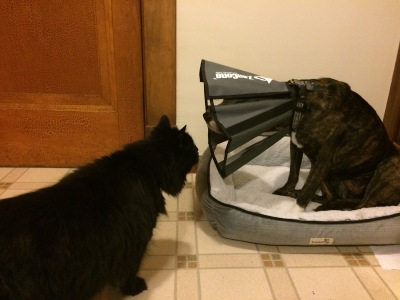 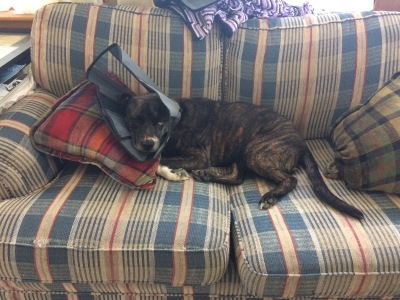 She didn’t get better. By Wednesday afternoon, she had also started opening up bloody lesions on her legs – similarly pimple-sized spots that, with no outside intervention, blistered open. Because she had the cone on, they didn’t get irritated into huge hot spots like her nose had, but they still kept opening up. She had as many as a dozen on each leg of varying sizes and severity. Most of them opened up and scabbed over pretty quickly; only a few of them were actively pussy and bloody like her nose.

Thursday, we went back to the vet. She should have at least paused in her progression on the antibiotics, and we were seeing none of that. So we did a barrage of tests. The vet pulled urine to test for canine blastomycosis, and after listening to her lungs, also ordered radiographs for that same reason. Her nose was too raw and open – she had managed to rub it when I took the cone off for two seconds – to culture, but they took biopsy punches of her nose, two legs, and one ear. They sent me home with a topical treatment to apply as I could, and then we waited.

Through that weekend, she finally started seeing incremental gains, but also some setbacks. Her nose finally started to scab over and heal, but she opened up new lesions on her ears, and her legs still had some lumps and scabs. Her ears continued to progress and her nose continued to heal all through the next week.

We got the urine test back first, and the second opinion from the radiologist: no signs of the blastomycosis, thankfully. That still left quite a few possibilities, though, and one that was looking increasingly likely was some kind of auto-immune disorder like pemphigus, in which her immune system was attacking and breaking down her own skin. That was our most likely worst case scenario. Fast moving skin cancer was still on the list, but looking less likely as she healed a little bit.
Two weeks after her first vet appointment, we went back to get her stitches from the biopsy pulled, and they finally had the biopsy results: deep bacterial pyoderma. In other words, a bacterial infection that had started on her nose but wreaked merry havoc systemically. Actually a pretty good case scenario! We added prednisone to the mix, and the vet put in a call to a dermatologist to get a secondary consult to make absolutely sure we had covered all the bases.

she did not think the comfy benches should be just for people.
She’s been on the prednisone for about a week now, and is waiting to start her taper & to go off the antibiotics. We’ll hopefully be able to do that soon. We’re waiting on the dermatologist’s opinion and to make sure she has no more scabs. She’s still got one or two on her legs and her ears. Mostly, she’s just down to bare skin in those spots; we’ll see what grows back in! 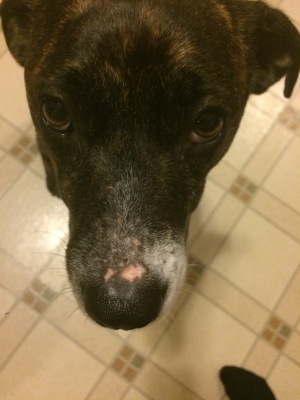 Life on prednisone is not a ton of fun; she’s drinking and peeing constantly, and lethargic. But she’s spending more time than not out of the cone, and her personality is mostly back. She’s clingier than she was – she will not let me out of her sight – but has occasionally started wreaking havoc again, taking apart her toy box to find exactly what she wants to chew on, leaving nylabones where we can step on them in the middle of the night, and waking me up to tell me all about her morning walk when she gets back from it.

So that’s been my life for the last few weeks. She and Tristan were actually neck and neck for vet bills for a little while – small animal diagnostics: they are not cheap! – but with the most recent bill from the barn for supplies, Tristan has pulled ahead again, sigh.