See, when we first bought the house, the biggest issue that came up (after things we already knew, like old wiring and no insulation) was that there was a foundation crack in the bonus garage.

The bonus garage is part of a 1970s era addition that was not terribly well done. In particular, when they added new foundation, they did not grade well at all. They left the dirt uneven with huge holes around the edges of the foundation, both inside and outside. Our property is all on a hill. Over the years, this has meant water coming down the hill, getting inside the foundation, collecting in the holes, and in the winter, freezing. That means foundation cracks.

The addition is the furthest right part in this picture.

First, we had to add topsoil to the crawlspace to level out the holes. The only access to the crawlspace is through a basement window sized hole, and it is a true crawlspace. That meant I crawled up through the window and my husband lifted up bags of topsoil in through the space. Then I dragged them to where they needed to go, cut them open, and shoved the dirt where it needed to go, either with my hands or with a spade.

Top right is the only access to the crawlspace.

I don’t think I need to elaborate on how much this sucked, but rest assured: it sucked. We ended up putting 40 bags of topsoil into the crawlspace, or 30 cubic feet of dirt. When I finished, it wasn’t perfect, but the holes were filled in and it was dramatically more level than it had been. There is no longer an 8″ deep ditch around the inside of the foundation, hooray!

It’s hard to see but you can get a sense of the ditch on the left hand side of this photo. Also the grossness.

I was sore for days – hauling heavy bags of dirt on your hands and knees will do that to you – and thankfully I have many pairs of project jeans because I was head to toe filthy.

The next step was spreading a 6mil barrier over the dirt: this would keep any moisture from coming up and into the man cave above. We know this had happened quite a lot in years past because when we took out the tile that had been on the floor, there was no glue left holding it down. Moisture had come up from the ground, through the beams, and dissolved the glue.

A sense of the size of the space, and the plastic. It goes up a few inches on the edges.

The next step was to add some hydraulic cement to the more egregious cracks, especially those on the hill side so no water could come in that way. I don’t have pictures of that, sorry, I can’t multitask that well.

The last step was to add 15 bags of landscaping stone on top of the plastic to hold it down. 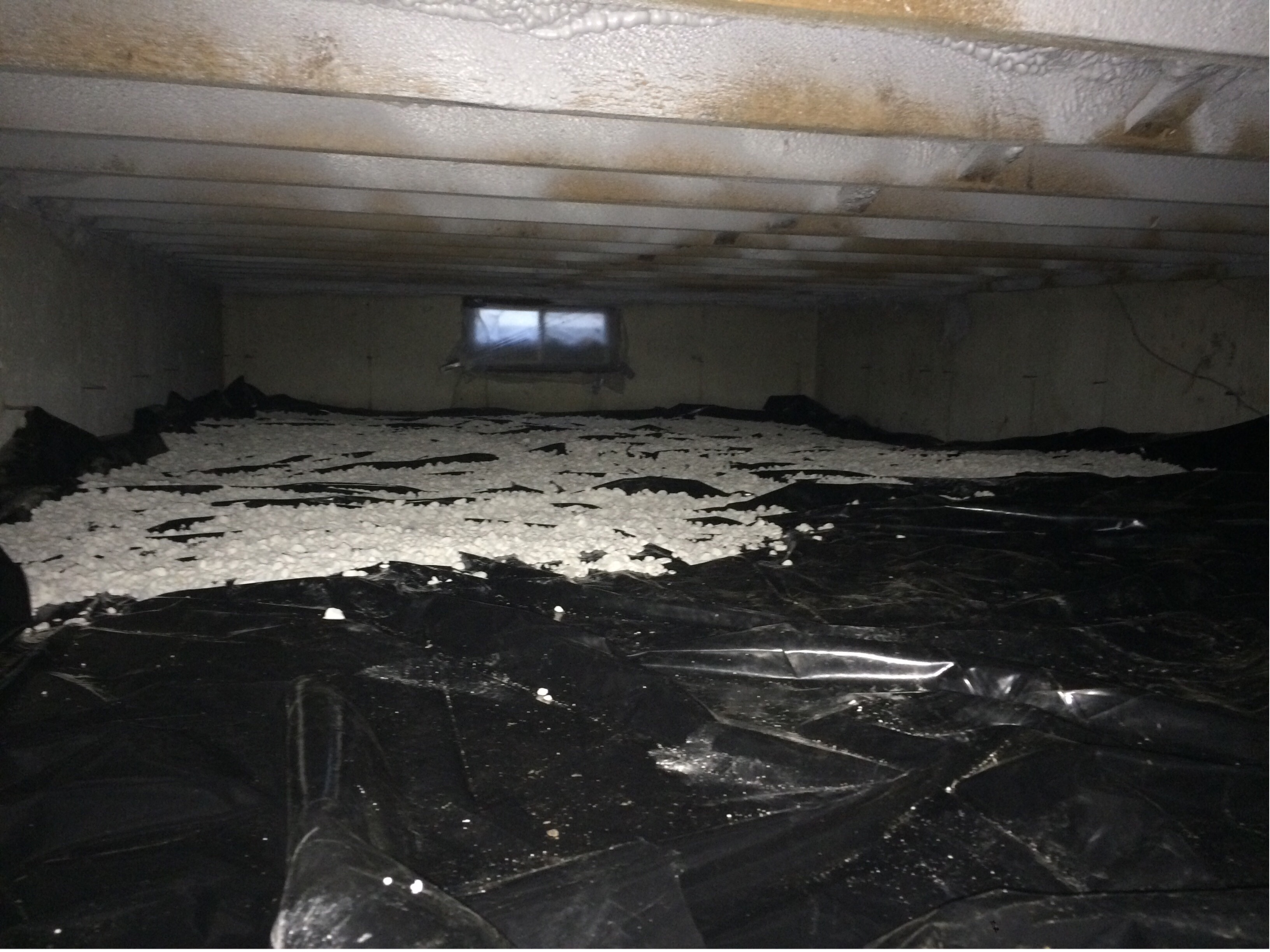 As much as this project sucked, I feel really good about it. When we bought the house, someone told me that the things that kill houses are moisture and movement. We’ve made a huge step toward stopping both of those things in this space, and also I never have to go into that crawlspace again, glory hallelujah.