It was just too nice to stay inside last night and bang out trot sets, which had been the plan, so I just started off in the indoor and warmed up and then got my new baseline out of the way.

So, our progression thus far:

After the baseline, we headed out to the field for some walking and trotting. Tristan was wholly uninterested and unimpressed and kept tripping. Sigh. But at least it was pretty? 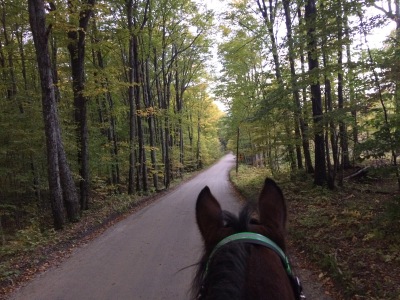 Last night I threw on my jump saddle and headed out to the fields to work on my two point. And realized that we are both sad sacks. This was reinforced by the official competitor’s list in which I have to be among the top 5 lowest times. Room for improvement, right?
Anyway. We went down the field, we went up the field, we went across the field, and then we headed down the road for a bit. It was actually warmer than it has been – in the low 60s – but for whatever reason Tristan got progressively more up through the ride.

He tried (admittedly, half-heartedly) to take off with me up the hill, and then on the road on the way back he spooked, and kept spooking: a stray cat in the woods, a slippery bit of gravel.
And then a UPS truck.
Yeah. He got jumpy when he heard the rattle of the truck behind us, and I pushed him as far to the side of the road as possible and sat deep. Then the truck passed us, and he went up and sideways. Toward the truck. I’m sure we gave the truck driver a heart attack – we were probably only a few feet away from the side of the truck, on a rather narrow dirt road.
I actually never seriously thought he would go into it – he has more self-preservation than that – but it was still an ugly few seconds as I pony kicked hard to get him to go back to the right and manhandled the reins a bit to stop him flinging his neck all over the place, all while yelling at the top of my lungs “COULD YOU JUST FUCKING NOT RIGHT NOW?”
And then the truck passed, and things were fine, until the next gust. Ugh.
So we did a little bit of walking in which he did not get any say whatsoever in where he put his feet, and we went into the outdoor and did some big trots around the edge of the arena, then incorporated some trot poles, and he did not get one iota of say in anything he did for the next 10 minutes. He had to put his feet where I told him to, when I told him to. That seemed to put his brain back between his ears, with the added benefit of getting some nice pole work in.

So, mixed success on the two point front – though I did get some work in while we were still in the field, and I stood up at the walk when he wasn’t spooking one the road – and a sort of, kind of near death experience
Tonight: dressage school with some two point practice, then some trot sets tomorrow in the outdoor.

I finally dd t. I signed up for 2pointober, the annual two point challenge. I’ve wanted to each year it’s been held, but always missed the boat for some reason. No longer!

I try to incorporate at least a half a lap of two point into each ride, if only to get off Tristan’s back while warming up, so I am not quite as pathetic as I could be, but the difference between those short stints and a quality, sustained two point position is vast and cavernous.

So last night I set out to get my baseline, which was fraught with all sorts of problems.

First problem: I haven’t ridden in my jump saddle in at least a year. Sonofabitch, ow, said my knees and my ass. Short stirrups + hard as a rock old Passier = some adjustment necessary.

I do love it, though.

Second problem: My really poor grasp of keeping my horse forward. We started no fewer than three times and he would drop to the walk, then halt, and then when I applied crop he would lurch forward into a hand gallop, flail sideways, get pissed off, flip his head around, and inevitably the weakness of my position would be revealed, ie, I would flop around like a beached fish in a way that could not conceivably be counted toward baseline.

Here, have last night’s pretty sunset to distract you from my suck.

Corollary to problem #2, a result of the aforementioned lack of quality in my position: I can’t keep my damn leg on in two point.

Third problem: Timing. During the above-described flopping around, I dropped my iPhone. Twice. Ugh.

After all of that, I FINALLY got a baseline.

So here is my officially declared baseline for 2pointober 2015: 47 seconds.