I finally dd t. I signed up for 2pointober, the annual two point challenge. I’ve wanted to each year it’s been held, but always missed the boat for some reason. No longer!

I try to incorporate at least a half a lap of two point into each ride, if only to get off Tristan’s back while warming up, so I am not quite as pathetic as I could be, but the difference between those short stints and a quality, sustained two point position is vast and cavernous.

So last night I set out to get my baseline, which was fraught with all sorts of problems.

First problem: I haven’t ridden in my jump saddle in at least a year. Sonofabitch, ow, said my knees and my ass. Short stirrups + hard as a rock old Passier = some adjustment necessary. 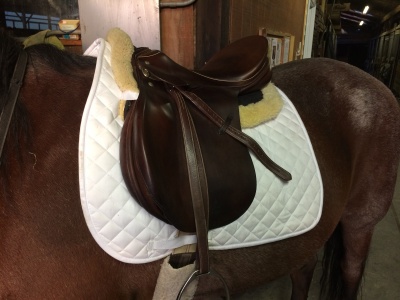 I do love it, though.

Second problem: My really poor grasp of keeping my horse forward. We started no fewer than three times and he would drop to the walk, then halt, and then when I applied crop he would lurch forward into a hand gallop, flail sideways, get pissed off, flip his head around, and inevitably the weakness of my position would be revealed, ie, I would flop around like a beached fish in a way that could not conceivably be counted toward baseline.

Here, have last night’s pretty sunset to distract you from my suck.

Corollary to problem #2, a result of the aforementioned lack of quality in my position: I can’t keep my damn leg on in two point.

Third problem: Timing. During the above-described flopping around, I dropped my iPhone. Twice. Ugh.

After all of that, I FINALLY got a baseline.

So here is my officially declared baseline for 2pointober 2015: 47 seconds.

4 thoughts on “The Agony and the Ecstasy of 2pointober”