Let’s start at the very beginning, and possibly with the only concrete evidence that we have of the first Morgan horse actually existing: his stallion advertisements.

Stallion advertisements are exactly what you think they are. They’re very much the same today. They extol a particular sire’s breeding, conformation, temperament, and track record. They announce the price for his services, and where he’s standing. It’s a genre of advertisement that’s been essentially the same for probably hundreds of years.

As best anyone can figure out, Figure lived from 1789-1819. During that time, depending on how you count, he was owned by anywhere from ten to sixteen people. He was leased by still more as a stud. His movement makes sense – there’s no shipped semen in the 19th century, and breeding at his level was highly localized. But it does make things harder.

So far, historians have uncovered just a handful of Figure’s stallion advertisements.

The earliest are all from Spooner’s Vermont, one of the state’s oldest newspapers, based out of Windsor. They are nearly identical, and were all placed by Justin Morgan himself. They date from April 15 & 22, 1793 and April 28, 1794. 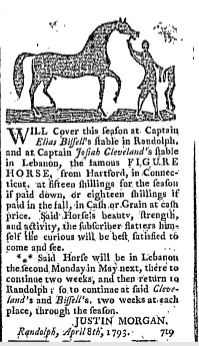 You’ll notice a couple of things in this ad.

First, Morgan is already advertising Figure as “famous,” referring to previous stud service in Hartford. To my knowledge, there’s as yet no evidence of time that Figure spent in Connecticut, but there has been some speculation – about which more in a future post.

Second, there’s no lineage described. I’ve been having some back and forth with an equestrian historian about this. It was typical for stallion advertisements at the time describe bloodlines, so some take this as evidence that Figure did not have the breeding that was later ascribed to him.

Third, the ad is dated April 8 – it actually ran for 3 issues, or about 6 weeks. That gives us some useful chronological information.

Last but not least, some people have claimed this is our only true portrait of either Figure or Justin Morgan. It’s neither. It’s a stock engraving that Spooner’s used in other stallion advertisements as well. The best you could claim is that Morgan chose this particular image.

The next Spooner’s advertisement, one year later, doesn’t have the image, and the text is slightly different. 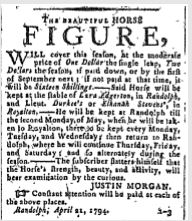 The text emphasizes the locations that Figure will stand at stud, with somewhat minimal description of his prowess – only the last sentence, really. 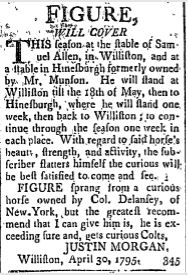 This ad is where things get really interesting. In order:

First, Figure has moved from the central Vermont area (Lebanon, NH, Randolph, and Royalton are all quite close to each other) to much further north – Williston and Hinesburg. Randolph (where Morgan himself lived) to Williston is over an hour by car today, on the highway – just over 55 miles. It would have been quite a bit longer journey in 1795.

Second, that last paragraph tells us SO much.

“A curious horse, owned by Col. Delancey of New York” – he’s finally getting some lineage. I’ll talk about this horse later, but most historians believe this was a Thoroughbred stallion named True Briton or Beautiful Bay. This parentage is extremely interesting on many levels, and I’ll write about it quite a bit more later. But having Morgan himself claim this in writing is a really big and important piece of evidence.

“he is exceeding sure, and gets curious Colts” – he’s been at stud in Vermont for about two years now, long enough for some of his progeny to be on the ground. I’m not sure how to interpret “exceeding sure.” It could mean that mares stay in foal to him – thus a better investment – or it could mean that he’s stamping his get. The latter is definitely part of the Morgan legend: that every horse Figure sired looked just like him, genetics be damned.

The 1795 advertisement is the last time we see Figure belonging to Justin Morgan, who died in 1798. There are conflicting stories about how and when Figure left his ownership, but I’ll talk about those later.