(as a very quick note: I made the executive decision to skip Man O’War, which technically for some reason goes in between The Black Stallion and Flame and this book.) 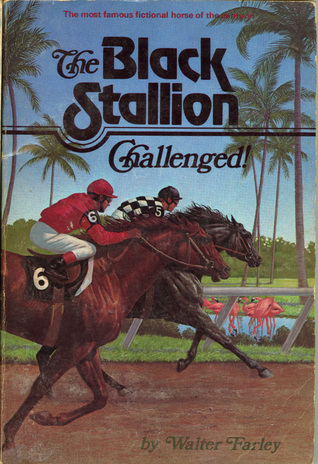 Alec and the Black face off against Steve and Flame on the racetrack.

Let’s get one thing out of the way first: this book is really thin on the ground in terms of plot. Basically the entire book is Alec hanging around Hialeah talking and thinking about being a jockey and lecturing Steve and then there’s the race. That’s it. That’s all that happens.

That doesn’t mean the filler stuff isn’t weird and nuts, though, so let’s do this.

You may or may not remember from the last book that the Black headed home from Europe with a stone bruise, and that bruise bothered him according to the dictates of plot through The Black Stallion and Flame. Well, we start this book off with Alec and Henry fussing over that same stone bruise.

“What are you looking for, Henry?” he asked.

You guys, I am like the poster child for neurotic obsessiveness about my horse’s medical care and fuck if I am ever going to get multiple x-rays of a goddamn stone bruise.

“We’ll just keep giving him long, slow works for the time being. If he continues to go well, as we hope he will, and his condition is as good as it should be, we’ll race. Otherwise, he’ll stay in the barn and we’ll have a nice quiet winter ini sunny Florida. As you said before, that’s not too bad.”

Can we line up a few facts here?

Keeping the Black at the track in Florida, away from the entire rest of their business, is simultaneously the dumbest and most expensive way to spend a winter.

As the veterinarian had said, “I don’t mean the Black is just racing sound, Alec. He’s completely sound.”

So while they’re sitting around angsting about the Black, Alec reads some fan mail, and one letter happens to be from a guy named Steve Duncan. Remember him? Well, he writes Alec a letter and then comes to see him at the barn.

And you guys, Steve got weird since the last time we saw him. By weird, I mean he became a huge asshole.

“It takes a long time to become a race-rider,” Alec said.

“Not in my case,” Steve answered.

Seriously, though, a HUGE asshole. He’s pushy and rude and smug to Alec even in a situation when he’s the one asking for help and advice.

Steve laughed. “I don’t think there’s much difference in riders,” he said, “even race-riders. Get on the best horse and you’re the best rider. It’s as simple as that.”

Despite all of this, Alec gives him advice: get Flame to a couple of races in the Bahamas, get him a record, and then bring him to the states.

Anyway, Steve flounces off, and Alec gets on with his life.

Alec washed up and then went to the track kitchen for a cup of coffee. He didn’t linger over it or spend any time with the other men who were there, for he had a lot of work to do before Henry arrived….

After finishing his work in the stall Alec began grooming the Black. No one else could do this job, not even Henry. It made for a long day but there was no alternative.

YOU HAVE ONE HORSE ALEC. How long does mucking one stall and grooming one horse take???

Anyway, the next, like, three chapters are Alec and Henry scoping out other jockeys and other horses and it’s insanely boring. Basically Alec gets shat on by Henry constantly because Henry doesn’t think he’s focusing enough.

I’ll address the elephant in the room now because it’s going to be the theme of the rest of the book. Alec has ridden exactly three horses in races. In chronological order, that’s the Black, Satan, and Black Minx. That’s it. We have a pretty comprehensive view of Alec’s entire life through this series of books, and those are the only three horses he ever rides. But in this book he’s supposed to be this tough, experienced, smart jockey. Everyone looks up to him as a great rider, really talented, really hardworking, who knows his stuff. THREE HORSES. THREE. It makes NO sense. None. It’s a ridiculous attempt by Walter Farley to inject a whole lot of magical thinking into the plot.

Anyway, speaking of magical thinking, the Black is a turf horse now.

“Take the Black over the grass course this morning.”

Sure why not there’s no difference at all between racing surfaces you just go and do that.

More grumping, more railbirding, and then there’s this totally and utterly insane sequence when there’s a race during a huge thunderstorm.

A bolt of lightning split the sky, and Alec was able to distinguish the silks of the riders as their mounts reared in the starting stalls. “I still think the starter ought to hold them off,” Alec said.

A filly in the race is injured, and it makes Alec worry about the Black all over again, and he ruminates on the Black’s injury (which…now seems to have been an abscess? maybe with some foreign debris? it’s wholly unclear.) and somehow that gives him a really terrible idea.

“It’s something we should know about,” Alec said. “Part of our job, like you’re always telling me.”

How is watching leg surgery part of your job? How? Anyway, it freaks Henry right the hell out because he’s having his own medical anxiety.

During the operation, Alec starts quizzing the vets and there’s like a whole crowd and it’s this super weird and chummy boys’ club where they all hang out while the vet pieces back together this poor filly’s leg and it’s just super weird, you guys. My best guess is that Walter Farley did a bunch of research and didn’t want to waste it so he wrote this scene.

There’s a weird bit where Alec goes on TV with a bunch of other jockeys and they answer awkward questions together. There’s a real attempt to paint out the personalities of the other jockeys: one’s a talented kid, one’s in it for the money, one’s a hardened veteran who loves it and will never retire, etc. Honestly it’s all kind of boring. I wish I cared, because it could be a really cool angle, but I just don’t.

Well, except for this bit.

Pete Edge sat alongside Jay, his short legs crossed. He was built square and was strong enough to drag the carcass of a dead horse out of his stall, which Alec had seen him do.

WHAT THE EVERLOVING FUCK?!?!?

Weird interview over, it’s time for Steve and Flame to arrive. And he makes an impression – Alec and Henry both freak out about how much he looks like the Black. But Alec still wants to help Steve out.

“Will you be working the Black tomorrow? I mean…if you are, do you think you could work him with us?”

“Together? The Black and Flame?”

“Yes. You see…what I mean is that it would impress the track officials more than if I worked Flame alone. They’d see the kind of horse he is when he could stay with the Black.”

This is an absolutely terrible idea, so naturally Alec is fine with it.

He knew too that neither he nor Steve were any longer a part of this race. They were only witnesses to a savage battle that had been going on since the beginning of time. What would have been natural combat between two competing stallions had given way to the strongest instinct of all – flight! They would not stop until they had run themselves into the ground.

The two stallions staggered as they approached the tunnel beneath the stands, and rocked on the springs of their legs, one tired foot following another. The interplay of muscle was there for all to see but so was the immense fatigue. Every movement appeared torturous.

Alec realizes that Steve intended to provoke the Black and yet still defends him to Henry.

Steve enters Flame into a race and it’s…nothing like the race from The Island Stallion Races. Remember how Steve basically targeted Flame at horses up front? Yeah, no, Flame is perfectly happy to just run along and let Steve guide him around the track. He wins, of course, which makes Steve even more of an insufferable asshole than he was.

Steve shrugged his shoulders and stood up. “I know you mean well, Alec, but you never rode a horse like Flame.”

“I know the kind of horse you’re talking about,” Alec said quietly. “But let’s leave it your way.”

So, the day comes, and the Black and Flame are entered into the same big race. It’s kind of anticlimactic? I dunno. Just kind of boring as far as races go in these books.

The Black wins, of course, in a photo finish by a sliver of a nose. And Alec’s first thought is to go find Steve.

He felt that the activities about to take place in the winner’s circle were not as important as his talking to Steve Duncan as soon as possible. For Steve, the apprentice rider, had been beaten to a greater extent than his horse.

Alec behaves through this whole book as if he and Steve are in some kind of weird abusive relationship. Steve is a complete asshole, and Alec keeps going out of his way to help him and be nice to him.

Steve recovers a little bit at the very end and realizes that Alec’s been trying to be nice with him the whole time. They have a nice little exchange about why Steve wanted the money from racing – he’s trying to buy Azul Island – and then…the book ends.

What do you think? Was this totally wasted? Did the aliens transplant Steve’s personality? What the hell kind of jockey hauls a horse carcass out of a stall???