Also an apt description of our weather for the past 10 days or so, after several weeks of brutally hot and dry weather. Yay climate change?

Anyway, when last we left our intrepid mustang, he had a funky spot on his sole in the same place as his old surgery scar.

In rapid succession, last week after I wrote and published that post, a heel grab that he’d done a few days previous started to get worse, and he went on a hunger strike against his grain, which meant he wasn’t getting his meds, which meant his hives came back.

First, the heel grab. It was fairly run of the mill last weekend, and for my lesson on Monday we covered it up with alushield and a bell boot and it was fine. He went out in bell boots the next day…and came in with a rub from them on his pastern. 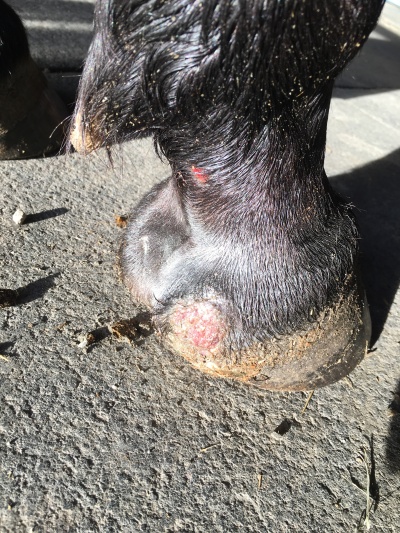 Not catastrophic, but not great, right?

Well. Between the humidity & wet rain, and I don’t even know what idiocy, it got worse. It kept opening up, and kept bleeding. The coronet band below got white and soft. Kept bleeding. We kept chasing it but finally had to start wrapping it, and as of today, it’s still not really healing. It’s not getting worse anymore, but it’s pretty definitively not great.

Around day 3 of the heel grab just not cooperating, he started truly and definitively refusing to eat his grain. Now, in one sense, that’s not a huge problem; he’s on the chubby side of where he should be just from hay and grass, and when I say grain I mean “a cup of alfalfa and half a cup of ration balancer” and really it was mostly intended to hide his allergy pills, because remember how he has to be on allergy meds all summer or he breaks out in hives?

Yeah, well, no grain, no meds, hello again hives! So starting Friday night, I’ve been going to the barn in the morning and evening and dissolving his pills in some water with Jello powder and syringing them down his stupid throat. Which we are both enjoying just as much as you might imagine! He’s always been really bad about taking meds orally – he’s a total pain to deworm. No coaxing, positive reinforcement, patience, or anything else has ever changed it, nor will it ever. The only thing that works is to grab his halter, and if he is being extra asshole-y, snapping the halter hard once to remind him who’s in charge, and getting it over with quickly. 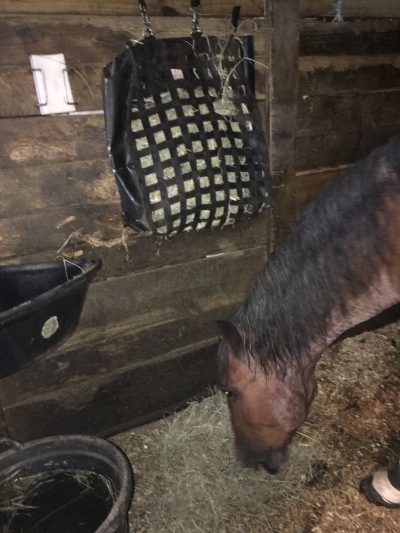 the face of a horse who is very carefully ignoring me

In good (?) news, I chatted back and forth with my sainted vet last week, and she’s going to be in the area tomorrow, so I took the day off from work and we are going to go to town on him. Initially, she thought she was just looking at the funky spot on his hoof, doing a lameness exam, some x-rays, and maybe a venogram (short aside, I am struggling with the venogram because on the one hand $$$ but on the other hand my brain keeps going THAT SOUNDS SO COOL!!!!!).

Little did she know that she’d also be trying to find us new allergy meds (maybe a powder?) and looking at a heel grab that the barn manager is increasingly worried about getting infected because IT JUST WON’T STOP FUCKING BLEEDING.

the barn manager does a damn fine wrap

I am a little on edge and fed up with life right now, is what I’m saying. I’m trying to channel into other things, but with yet another week of no riding, my hopes of competing at First Level in September and not completely embarrassing myself are starting to fade.

8 thoughts on “When it rains, it pours”