Short answer: foot is probably fine, but heel is not. Surprise!

Okay, and now for the long answer.

We started off right away with the vet pulling off Tristan’s heel bandage and blanching at what she saw – which I did, too. It did not look good. I knew that it wasn’t doing great, but it was several shades of not good worse than I had anticipated.

We set the heel aside for a moment, however, to take a good deep look at the problem child foot. I laid out what the farrier had told me – he believed there was scar tissue preventing the sole from growing well in that spot – and asked her what she thought.

reminder of what the foot looks like right now

Almost instantly, she said she thought it looked like white line disease – not a problem of the foot itself. But she also said that she’s not a farrier, and we should get foot shots juuuuuust to be sure.

Sooooooo we did! Many of them!

We also got shots of the left front for comparison, because findings from the x-rays were as follows:

Vet and I formed a preliminary hypothesis – which is what was in the back of my mind – that his toe is too long, and that’s leading to just a touch of separation at the toe, which is leading to white line. That toe will always be more susceptible to fuckery because there is still a scar at the hoof wall. And it may be that the toe just needs to be brought back further than the farrier would take it based on external evidence because of the abnormality in the hoof wall.

lateral view from a week ago: a little tough to follow the lines properly because of the wrap, but you can actually if you look closely see the slight bulge of the scar and maybe that the toe is a touch long

Overall, though? Actually less worried about the foot.

That said, vet is sending the rads off to both the farrier and Tristan’s surgeon because she is the very best and wants everyone in the loop. I’ll wait and see what the farrier has to say, but the meantime prep is to keep the hole clean, spray Blu-Kote in it, and pack it as possible.

My usual treatment for white line disease would be to nuke it with White Lightning, but that’s not possible right now because, well, that heel grab (which I will have you know I just mistyped as “hell grab”) is really not in good shape. 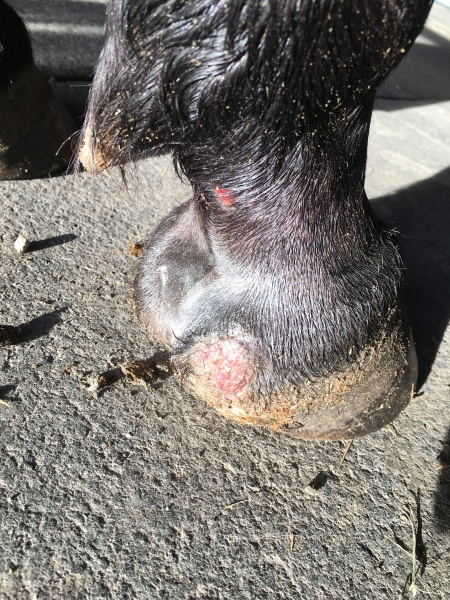 a week and two days ago 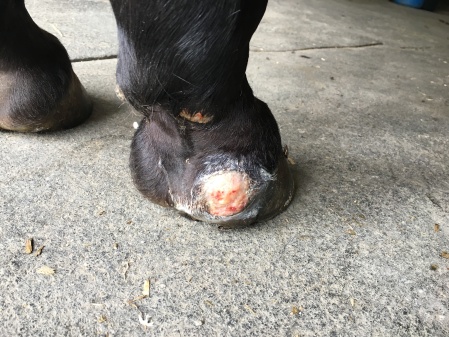 Why yes that IS both a raging infection AND proud flesh on both the heel grab AND the rub from the bell boot. BECAUSE WHY DO ANYTHING HALFWAY, TRISTAN.

Vet was not thrilled at. all. We spent almost as much time talking through a treatment plan for the heel grab as we did for the foot.

So yeah that’s great. Not.

I reminded everyone cheerfully that it’s been almost a year since his last epic vet adventure, to which the vet shook her head and said “I see all these animals in crappy pastures that no one has touched in months and they’re in perfect health, and then I come see your horse, who is so immaculately cared for, and he’s always doing something.”

(that said she does have a soft spot a mile wide for him, she grew up in California and had a red roan mustang, so she genuinely thinks he’s great)

Syringing meds 2x a day is still the plan going forward, though, tiny bright spot, he’s at least eating his cup of alfalfa again – not the multivitamin supplement – so there may be a future in which he at least eats his Prascend in his grain once summer is over and the allergy meds can go away.

But in the meantime, he’s now up to 25 pills at each feeding, which is, count ’em, THREE 60cc syringes’ worth of dissolved drugs. I loaded up on applesauce now that we’re doing this longterm, and last night he did at least seem to tolerate that a bit better than the water+jello, so that’s not nothing.

16 thoughts on “What the vet found”