I have this problem: I keep making careful plans, and then I get in the car to drive to the barn, and it’s beautiful. Then I make the last turn, and I look down across the fields and the mountains and the light is just so and I pull up to the barn and I just physically can’t stand the idea of riding inside.

So we go outside, and we play in the fields, and I regret nothing. So maybe it’s not really a problem…

Yesterday: got up 3 hours early, worked 2 hours at the food coop for the member/worker program, did 9 hours at the day job, got home, did 2 loads of laundry, took the pup to the dog park, then settled her in with dinner and headed back out to the barn.

On a whim, I put Tristan in his jump saddle, because doing the everyday tack blog hop made me remember how much I love it. It’s just such a classy saddle. 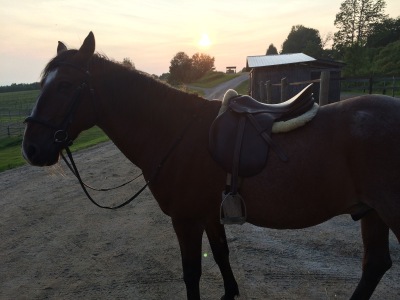 The most majestic of donkeys.
It also provided a different kind of exercise for me, because its stirrups are set to jumping length (though not XC length) and I have been riding almost exclusively in my dressage saddle. Immediately a different feel.
We worked up and down the big gallop hill, mostly at the walk, but a bit of trot at the end. This horse, you guys. He hadn’t been worked in 5 days while I was visiting family, and last night I asked for a trot in an open field and he listened perfectly: strong into the bridle but took a half-halt from my core, moved out happily and cheerfully once he got the idea. There was a time asking for more than a walk would’ve resulted in a flat gallop and bucking fit.

We wandered a bit, and then I realized that there were pretty new jumps set up in the outdoor ring. And I was in my jumping saddle. And there were some straightforward crossrails set up on the diagonal.

So how was I supposed to resist that?

I asked for an easy trot, bridged the reins, and he practically stumbled over the first crossrail. He shook it off, and I didn’t want to end on that note, so we circled back around to the other crossrail. I asked for trot a little further out to get a good establishing forward rhythm – which was totally ruined when he realized we were jumping again and went WHOOOOOOOOO.

Or, as much as Tristan goes like that anymore. Basically he got strong in the bridle, a little more upright, and tried a few canter steps. It was a lovely jump, though, and I felt secure in my seat if a little overly defensive. So then of course we had to do them in succession, two on the diagonal. 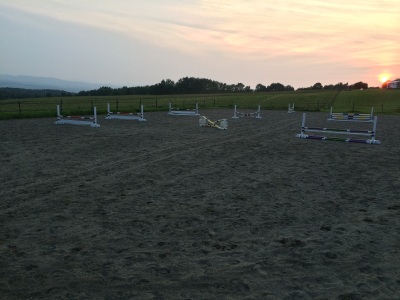 I was just supposed to walk away from that?

Jump 3 was suuuuuuper strong and long, and I got way left behind and had much too strong a hold of his mouth, which he let me know in no uncertain terms was unappreciated. He landed nose down and crow-hopping, I yanked his head up and said oh hell no, and put him back together.

Jump 4 was perfect. Strong and smooth and nailed a lovely bouncy canter on the correct lead off the landing.

I called it a day on that, and we walked around the ring for a few more minutes, and he did not want to be done. He locked on to every jump we went buy and when I dropped the reins took me to the base of an oxer. I think he wants to jump again!