In a continuation of my day at the Tunbridge World’s Fair, I present to you a picspam of harness racing!

Fairgrounds harness racing is apparently a different sport from regular track harness racing. For one thing, many owners drove their own horses, and there’s something of a tradition of one-horse owners who do just the fairgrounds circuit.

(Aside: basically the whole time I was watching this racing I had the line from Music Man stuck in my head: “Not a wholesome trotting race, no! But a race where they sit down right on the horse – like to see some stuck up jockey boy sittin’ on Dan Patch? Make your blood boil? Well, I should say!” Continue on to 76 trombones, etc.)

Anyway: here’s the race card for the day. 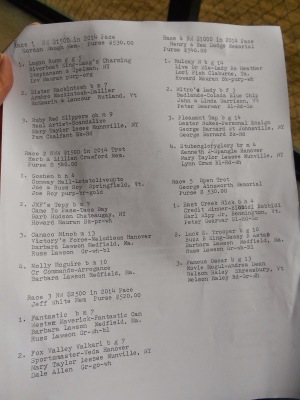 You can click to embiggen if you want to read it more clearly. Races were split between trotters and pacers, and all races were a mile. All purses were $520 or $530 – not huge money!

I confess, this made me laugh and laugh: the national anthem was played by holding a microphone up to what looked and sounded like a cassette player.

The track looked (and felt, since we walked across it several times) to be quite hard. I’m not sure I would’ve raced Tristan down it! They also didn’t so much drag it as grade it about halfway through the race card – it looked like scraping the dirt, rather than churning it up. 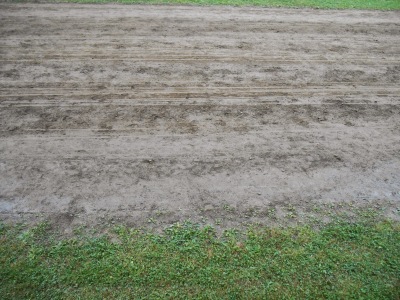 So I took about 8 million pictures, working on my timing, and from now I’ll only insert occasional commentary. Enjoy gorgeous trotting horses at an historic track! 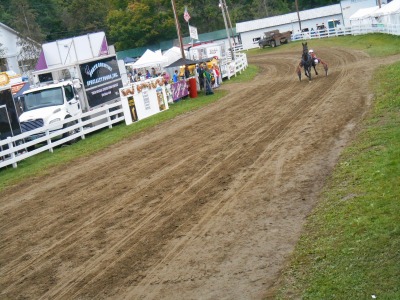 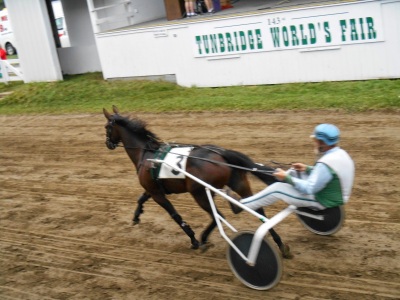 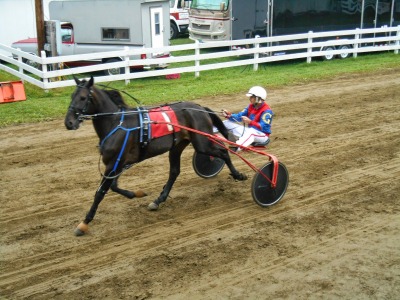 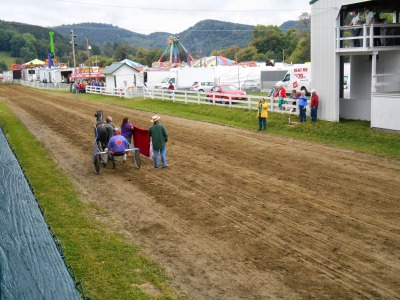 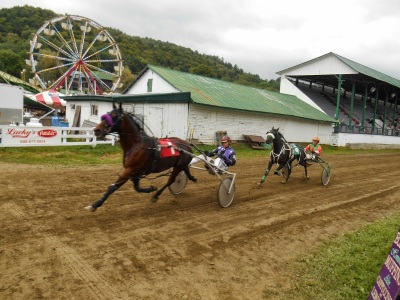 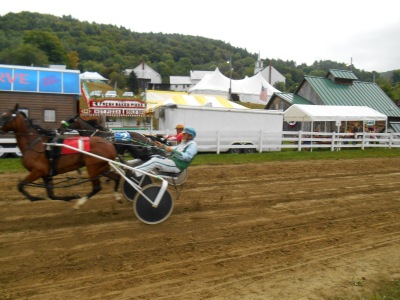 As you may be able to see, the near horse broke quite spectacularly – this was a very tight final stretch with the finish line about 100 yards to our left, and both drivers were yelling and cheering the horses on!

And two videos, one of pacers and one of trotters.

The Tunbridge World’s Fair is a Vermont institution. It’s one of the longest-running agricultural fairs in the entire country, and I believe it’s also the longest in Vermont. It has been at its current location since the 1880s. The first ever fair was in 1867, and it’s only been canceled for World War I (1918 only) and World War II.

I do an event on the fairgrounds for work earlier in the summer, but had never been to the World’s Fair. Since I had some work-related business to take care of with the fairgrounds staff (who are the nicest, coolest, most hardworking people I think I’ve ever met), I got to go down on Thursday for work. I took some time to get in some horse-related sightseeing while I was there.

I knew nothing about pony pulling when I sat down to watch the 1,850 lb class. I had seen video of a draft pull, and knew from a friend who’d worked with a team that they were trained to pull as soon as the hitch dropped, but that was it.

Wow, was I in for a treat. Warning: this is video-heavy, and you really should watch them. They are amazing.

There were four teams in the class that I watched. The announcer explained the rules: the team had to pull the stone boat a minimum of 6′ in one continuous pull. They had 5 minutes to make 3 attempts. (Though I do not know for sure, in researching since I have found out that most pulling events at ag fairs follow the Eastern Draft Horse Association rules, which are complex.)

I can’t emphasize this enough: these ponies were AMAZING. Absolute firecrackers. So flipping cool to see this in person.

The pull started with 1,600lbs on the boat. Here’s Molly and Rowdy showing that they pull that much weight every morning before breakfast, yawn.

Then they added more weight, bringing it up to 2,400 lbs. 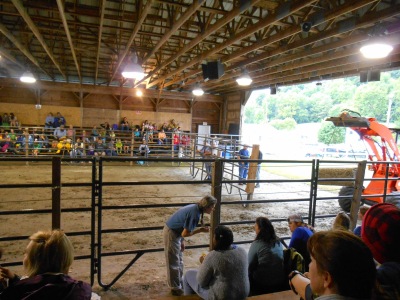 Here’s a pull of 2,400 lbs. Colonel and Major rock it.
3,700 lbs and shit starts to get real, but Colonel and Major still come through.
4,200 lbs and Colonel and Major start showing their grit, and also how amped up they are if the hitch doesn’t catch!
In fact, it was at this point that the team you saw in the first video, Molly and Rowdy, had some real trouble. They had been getting progressively more ramped up, and their driver had trouble getting them to settle in long enough to drop the hitch. They took off again and again without connecting. Then the hitch dropped correctly and they were off! The crowd cheered and cheered…and then when the hitch was lifted they TOOK OFF.
It was a very scary few minutes, but thankfully there were lots of good horse people around, who could handle them and get the hitch untangled from where it had gotten stuck in the tractor (!). So, at the beginning of the next video, which is Colonel and Major trying 4,700 lbs, you’ll hear the announcer say that Molly and Rowdy were withdrawn. They were both perfectly fine, but I think it showed great horsemanship on their driver’s part to realize that they were just done for the day.
5,200 lbs, the final weight. This one’s a fair bit longer and it shows you a failed pull. It also shows you how crucial it is – at least it seems to me – to get both ponies pulling immediately and evenly. One pony has no hope of shifting this weight.
Neither team pulled the full 6′, though Colonel and Major made 51″ on their final pull, which I think made them the winner. (The announcer, I think, sometimes assumed that everyone knew what was going on – which was a fair assumption, given the commentary I heard in the stands around me. Some serious pulling fans there!)
All in all, an awesome way to spend an hour. Next up: fairgrounds harness racing!

Sometimes my job is the best. Here’s what I got to do yesterday. Full posts coming soon.