As some of you may have seen, I spent almost two weeks in Ireland earlier in July. It was semi-last minute for me; my parents had planned the trip together, and my mom asked me to go with her instead. So, bittersweet, but as my mother frequently reminds us, she gets anything she wants right now – and also, I wasn’t going to turn down a trip to Ireland!

The majority of the trip was a planned tour, with hour-by-hour plans in various parts of the country. That is not my usual style of traveling, but it did mean that up until about the week before, I genuinely had no good idea of where we were going, which was kind of…freeing?

The one thing I did know was that the second Friday of the trip would be a free day in Galway. So I started hatching a plan to find a way to get on a horse on that day.

I did a fair bit of Googling before I left, and tried to pick a stable based on a few things: relative location to Galway (since I would not have a car), relative professionalism of a website (maybe some people are more trusting than I, because holy shit some of those websites?), AIRE accreditation (Association of Irish Riding Establishments, which seemed like it would give some measure of baseline accountability), and the options they offered.

After some sifting, Moycullen Riding Center ticked all the boxes. It was 7.5 kilometers from Galway center, so a reasonable taxi ride, and everything else lined up and looked reputable. I was particularly interested in the bog rides, because that felt more Irish, somehow. Plus, it was right on the border of Connemara, so I had high hopes for good horses.

I sent them an email through their website and waited…and waited. And never got anything back. Whoops. But – I was pretty determined, so once we were settled in Ireland, I called and left a message for them, about a week before the ride. I heard back a few days later, and they had a ride for me!

I got my upfront questions cleared: yes, they provided helmets, and all stirrups had toe cages, so I didn’t need to worry about only having sneakers. They asked me what level of experience I had, and bless them, they took my word over the phone that I was an experienced rider who was comfortable with walk-trot-canter. Judging by the number of horse trekking establishments we passed in other parts of the country, there were a lot of stables out there being very optimistic about (mostly American) tourists.

It took me two days to convince our tour guide that yes, I was going to do this, and yes, I was going to be fine. I think he’s used to the people he shepherds being complete fucking idiots, and also he was miffed that I was skipping the things he had planned for our free day, because he apparently did not think “free days” were an okay thing to have, even if the trip itinerary said otherwise. (I did not like our tour guide.)

On the Friday morning, I took a taxi for about 20 euros out to the riding stable, and well, there I was. I don’t have photos of the stable because it felt creepy to take them, but it was British-style shedrows around a small outdoor – maybe small court dressage sized. There was a lesson going on when I arrived (very early) and it just felt so good again to smell and see horses after almost two weeks away that I just watched the lesson and breathed. I liked the trainer, I loved the horse (a smart gray Connemara who had some spark to him but was very obedient) and I felt a bit for the rider, who was clearly verrrrrrry green. But doing generally okay.

When the time came, we all filled out liability forms, had a quick conversation about our actual riding experience, and got fitted for helmets. There was one other experienced rider, an American eventer from North Carolina, and then three others: a local woman with mixed experience (lengthy experience but a nervous rider), and two men who had never sat on a horse before.

The horses seemed to come in two types: big heavy cobs that looked half-asleep or cute little Connemaras that were too small for me. I started to fidget and get a big nervous, and then someone led a tall bay out from around a corner and gave him to me, and I was relieved. And then I saw he had a gag bit in, and I got a smidge nervous again.

My horse was introduced as Failte (pronounced fal-chuh, I never did get the hang of Irish pronunciation), an Irish Sporthorse/Warmblood cross. (I never did figure out what type of Warmblood, only that the trainer had a very dismissive view of warmbloods generally.) Despite the gag bit, we spent the first 20 minutes of the ride establishing that yes, I was going to put my leg on. He also did not want me to touch his mouth, but that was somewhat understandable with the gag in, so after establishing that he was a sensible sort of fellow, I generally gave him a long rein. 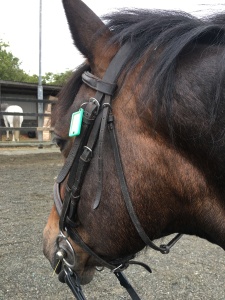 A few minutes into the ride, we split the group up, and the trainer and other eventer and I had a nice long run. It started with a trot of several minutes along a dirt road, and then we turned off the road into the bogs. I was second in line, and the trainer turned in his saddle and said “Just take a good hold of them, then. Keep him steady.” My face must have communicated something, because quickly added that generally it wasn’t a problem but if I really let him go, if he really got a good extended gait going, he could be hard to stop. 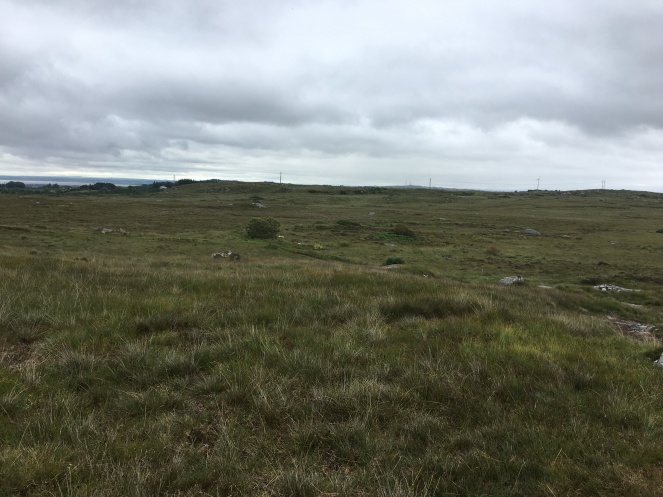 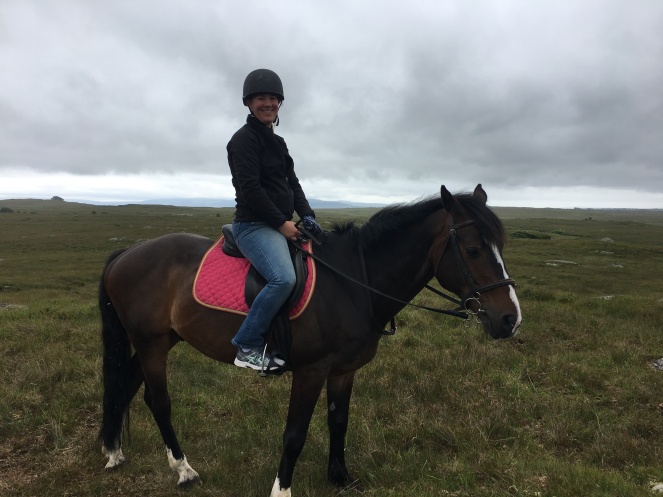 Well: I shortened the reins, I did a quick check of my jacket to make sure that everything was zipped and ready, and when the trainer in front of me cantered, I did too. It took me a moment or two to convince Failte that’s what we were doing, but once I did he gave me a lovely, polite, rolling canter. I stayed up in two-point for it, with my knuckles on his neck. Just in case he tried anything, and I was also watching the ground: we were on an established trail, but it was narrow, and we were definitely in a bog.

It was lovely. Really, truly, wonderful: gray skies and a good fast horse who took a half-halt nicely but was willing and ready to give me more if I asked, and beautiful rich green views as far as you could see.

We came back to the walk and picked our way up the last descent on a hill that gave an incredible view of the whole bog area. We let the horses have some grass to eat, and after a short break, while waiting for our novices to catch up, we headed back down the hill.

Total, we were out about 2.5 hours, mostly riding on narrow dirt roads with bog on either side. In many places we could see piles of cut peat from farmers getting ready for the winter; the trainer said in rural areas like that one, as many as 70% of the farmers still used peat to heat their homes in the winter. In the distance ahead of us we could see the Connemara mountains; to one side, a long, wide lake.

If anyone is going to Ireland, especially in the Galway area, I can’t recommend it highly enough. It was a very welcome space for me to get back on a horse, escape the tour, and see gorgeous things I would not have otherwise. 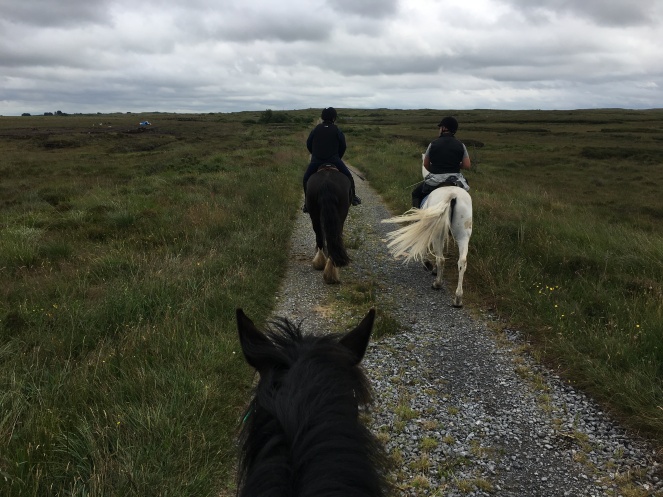 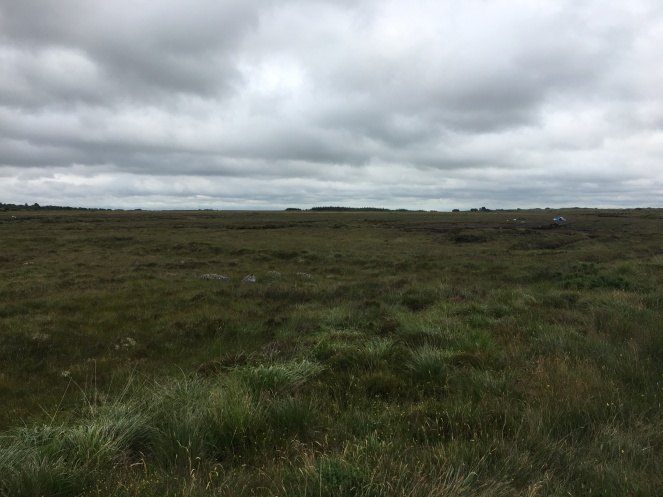 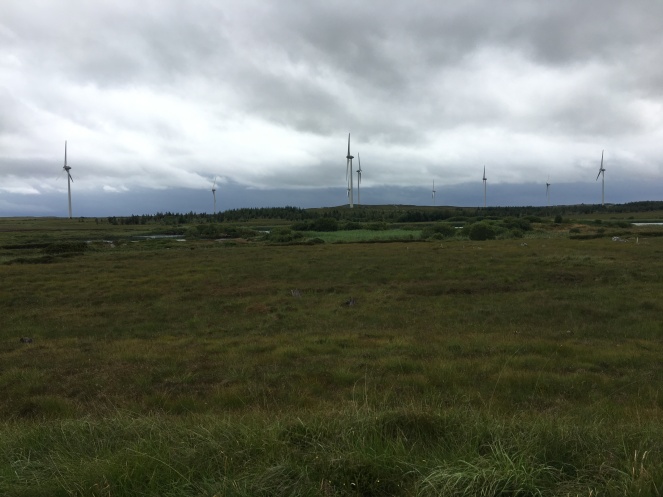 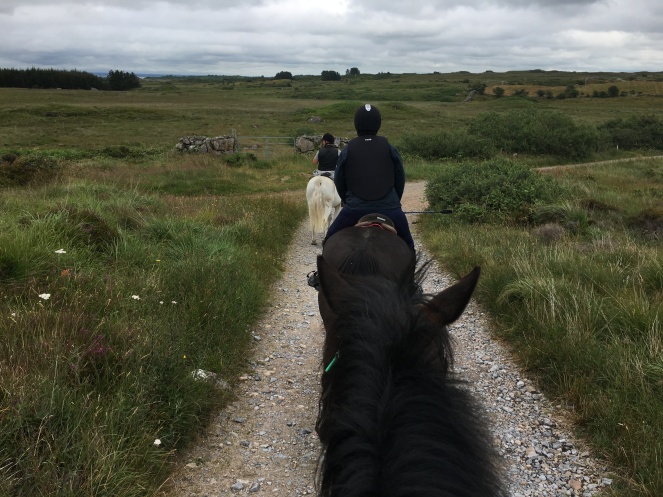 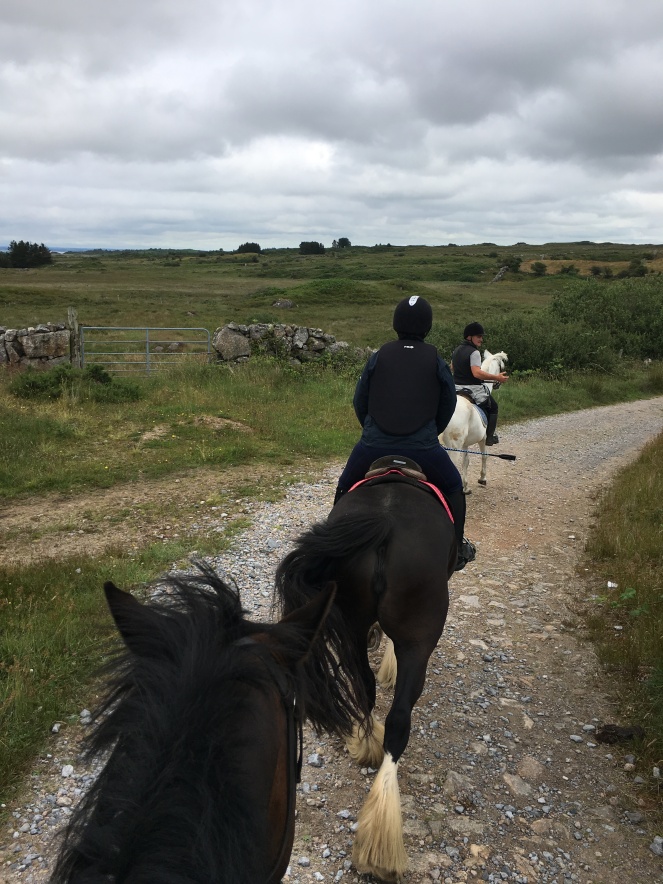 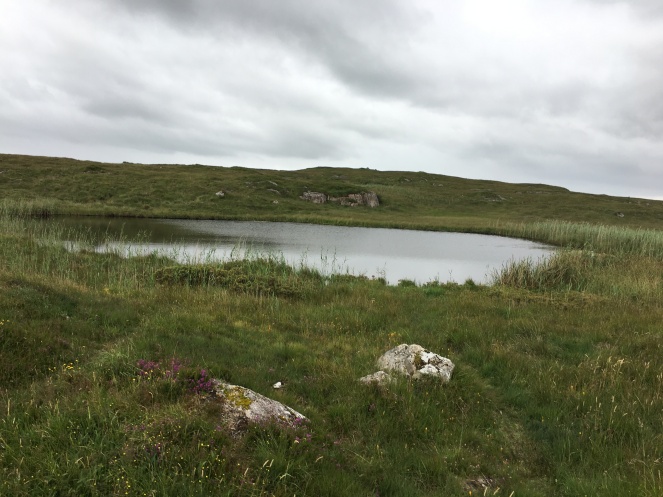 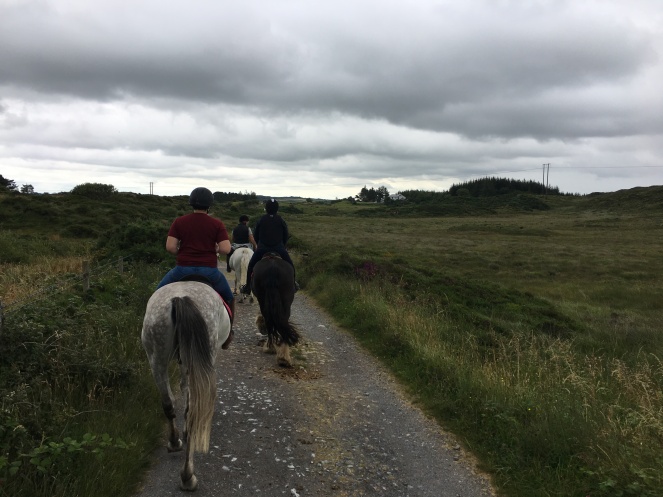 7 thoughts on “Horse Trekking in Ireland”