(did I make that title clickbait-y enough?)

I think that sometimes we fall into the trap of “it’s for horses, it should be horse-specific and come from a tack store!” Now, tack stores are magical places that have a miraculous ability to scramble brains and part you from your money but leave happiness in its place. This is a true fact. But it’s also a true fact that sometimes you can buy very good horse things at other stores.

Here are three things that are in everyday usage in my tack trunk and grooming kit that I bought at our local hardware store.

Once upon a time, I helped run a Pony Club. I had really terrific kids. They were smart, hardworking, and thoroughly prepared. Pony Club being what it is, however, they lost points in their Stable Management score because when the judge took out the knife that they had to have in their tack kit, it wasn’t sharp enough.

See, Pony Club required that the knife be able to easily cut through three strands of baling twine at a time, and well, that judge walked around with baling twine to test the kids’ knives. Obnoxiously obsessive? Maybe. But like with many things Pony Club, it’s also based in really sound, smart principles. Have really good equipment, and keep it in really good shape.

Immediately after we got back from that rally, I went to the hardware store and bought a really nice hunting knife. I’ve used it for nearly infinite things over the years, and it has a permanent place of honor in my tack trunk. More recently, I’ve added the Cashel Horseman’s Knife into the mix – it lives in my grooming kit, because it has other useful things beyond just the knife. (I love that Cashel knife so much I gave one to each of the barn workers two holidays ago, and sent one off to Saddle Seeks Horse as part of the 2016 Blogger Secret Santa exchange.

You can get wire brushes at the hardware store in the paint section. They’re just the right tool for stripping paint or varnish, especially off of metal or out of small crevices.

But why would you need one at the barn? They’re the best possible tool for truly cleaning out a horse’s foot. 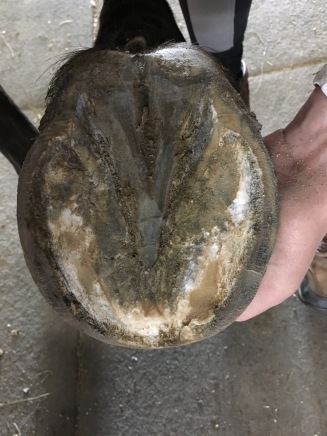 Left is a foot cleaned with a hoofpick + the brush on the back; right is the same foot thoroughly cleaned with the wire brush.

For everyday foot cleaning, the hoofpick brush is fine. But if you want to apply any kind of soak or medication to the bottom of the foot (especially something like Durasole), you have to get it as clean as possible, hence the wire brush. It also has the benefit of roughing up the sole to provide more of a surface for topical medications to “grab” onto. You’ll also be amazed at how much crap is hiding in the white line that you wouldn’t be able to get out otherwise. 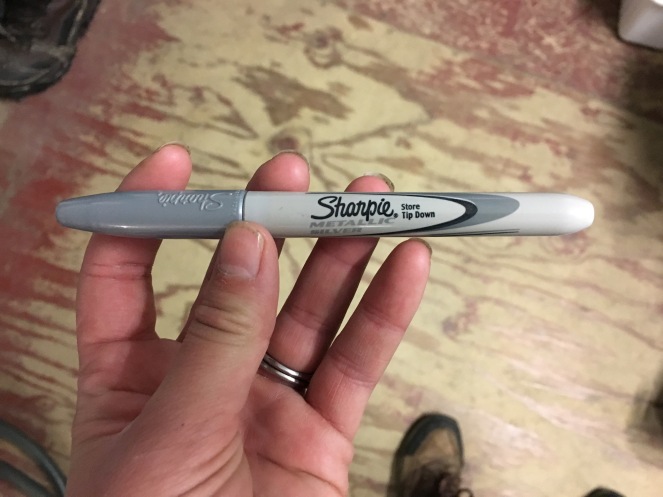 If you didn’t know these existed, you are in for a treat. They are the perfect tool for marking anything even slightly dark-colored, and as we all know, if it’s not marked, it will wander off. 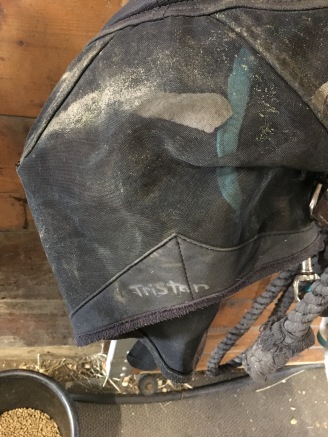 Left is his fly mask with the writing from last season; right is his brand-new riding fly mask, which I had marked just before taking the picture.

I do also keep a black Sharpie in my tack box. At some previous barns I kept dry-erase markers as well, because whenever I needed to write something on the barn white board there was never a good marker. So I bought my own and got possessive. The gist is, good marking tools are actually important and useful things to have in a tack trunk, and also, silver Sharpies are awesome.

Do you use any of these things? Do you have a favorite hardware store find that you use regularly around horses?