First: this two lessons a month thing is one of the best things I’ve done for myself in a very long time. It’s right up there with my decision to bake 2-3 times a week. Good self-care and adulting, hooray me!

So, notes from last week’s lesson, with lunging pics to break up the chunks of text: 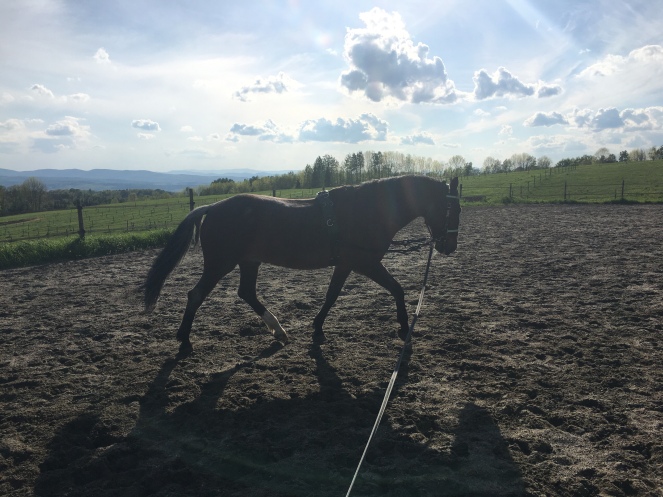 I’ve been putting some of these lessons into practice, particularly outside, where I have been reluctant to really push for forward on account of how sometimes he turns into a raging asshole. So far: success!

The biggest thing we’re trying to work through outside is the line between a forward trot and a canter. When I ask for a bigger trot, sometimes he just flings himself into a canter. And it’s a tough line between rewarding for response to the leg aid but also making clear that’s not what I wanted. So I’m vacillating between pushing him HARD once he gets into that canter (if you’re going to canter, it had better be forward) and trying to establish a very gently barring outside rein.

See, this would be easier if he were on the bit and/or at less reactive to any hint of stop, because I could just ask him to go forward more into my hands, instead of just blanket forward. Forward more into my hands would help establish more trot instead of canter. He’s better about not flinging into canter when I have him at least holding the bit with a following rein, as opposed to totally loose rein (which is necessary when starting out to establish our baseline).

I don’t have a good answer yet, but I suspect it’s some combination of chipping away at a baseline forward trot (so he has an answer that he goes to more regularly), being more subtle with my aids (so I can more clearly differentiate between “more forward” and “change gait,” especially trot-canter), and all-around mileage with this new way of going.