Last week, I found out that a day off I had requested back in April would finally be ok for me to take – someone had volunteered to provide the coverage needed. I had honestly totally given up on the request and kept it on the list out of pure reflexive frustration.

Thankfully, I found out the day before closing for the barn schooling show! I emailed the show secretary immediately, and followed the next day with my entry for Training 1 and Training 2.

I haven’t said anything on the blog because I was convinced it would fall through (part of me is still convinced something will go wrong) but I have been scrambling since then to get show prep done.

That includes:
– Finding all the various parts of my show kit. My white breeches and white show pad were AWOL for three days, and I finally had a brainstorm in the middle of the night of where I’d stashed them and thankfully, there they were. The breeches needed to be washed but that was easy enough. 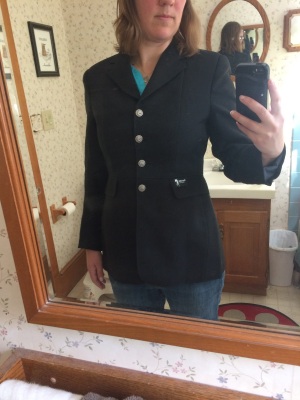 I know my dressage coat is several years out of style and I don’t care I LOVE IT.

– Actually trying to memorize my tests; haven’t finished this one yet.
– Practicing that newfangled long mane button braid that people are talking about. It came out pretty darn well and I’m going to go with it on Saturday! 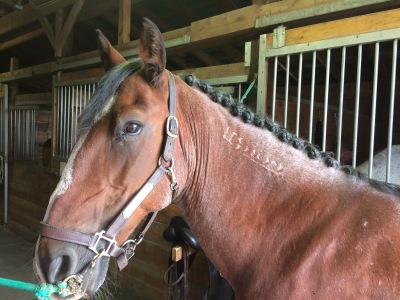 – Taking a lesson to tune up parts of the tests. Given how much of a shit he’s been in the outdoor we’ve been drilling it HARD, working through gradually less huge bits, and this was my first time in the snaffle we’ll have to use for the show. Bizarrely enough, he was well-behaved, soft, and suuuuuuuper behind the leg. Can’t win ’em all. So now I’ve been focused on revving him back up in the snaffle which hopefully will not swing the pendulum the other way? 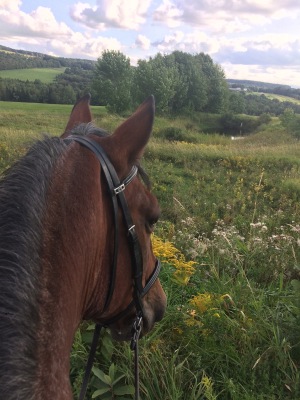 From the lesson: I need to round out my circles better, be more attentive about my marks. I need to ask for some left flexion down the center line and into my halts to keep him square & straight. I need to pay particular attention to my outside rein the canter circles coming off the rail because he’s awfully sticky. I need to post quickly and stay relatively light in the reins to encourage him to go forward. I need to use my diagonals to build forward and then carry it through corners. I need to get more precise about my aids for the canter depart.

My times are 10:20 and 11:20 because this is some kind of cushy and luxurious schooling show, I do not even know. Good grief.

So, we’ll see how this goes! Stay tuned for a recap next week.