So a couple of weeks ago Tristan was really, really sick. He’s totally fine now; the last vestige of that week is his IV site, and even that’s halfway grown back in already.

Which means it’s time for some reflection. What went right, what went wrong, and what can I do better next time?

You may remember that about two years ago, Cob Jockey did a blog hop about taking your horse’s resting temperature, pulse, and respiration so as to have that information on hand. I did the blog hop, though too late to enter to win a prize, and learned that Tristan’s average temperature is pretty reliably 99.5. So when the barn started taking temperatures regularly, I knew where he stood. Some horses ran closer to 100; others, closer down to 99. 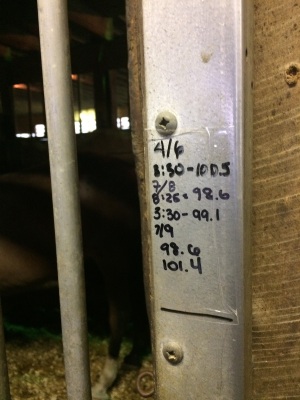 So when he temped at 101.4, I knew immediately that something was wrong, and we started treatment with banamine even though he hadn’t quite reached the threshold to start, per the vet’s protocol. I’m extremely glad we did start; we got a jump of about 8 hours, were able to give everyone a heads up that things might go south, and overall it was a managed problem rather than a true crisis.

Everyone should spend a week and get this basic information and write it down somewhere safe. It’s really, really important. I’m extremely glad that I did that blog hop.

Other things I’m glad about:
– I am a close observer of his regular behavior and attitude, and could usually tell even before temping him again whether his fever had gone back up.
– He is an impeccably well-behaved horse on the ground. I’ve worked really hard on this over the years that I’ve owned him, considering when I first met him he could barely be touched. It paid off in spades: he was easy and pleasant to handle even when he felt awful, he stood quietly to get treatment even when he did not like it one bit, and everyone’s life was a lot easier than it would have been if he’d been a more difficult horse. The best argument for putting (and keeping!) good ground manners on your horse is not the everyday stuff – it’s moments like these.
– I was able to react quickly and be flexible. I have a demanding job but an understanding one, and it was easy to communicate with my boss to let him know when I couldn’t be in. Modern technology also helped; I could check emails and respond to anything urgent during downtime. This isn’t an accident; it’s important to me that I have a job that treats me like an adult and a human being, and it’s a crucial factor to me in choosing an employer. Sooner or later, we’re all going to have an emergency, and life is easier when you’re confident that your job can be put on hold for a few days and they have your back. 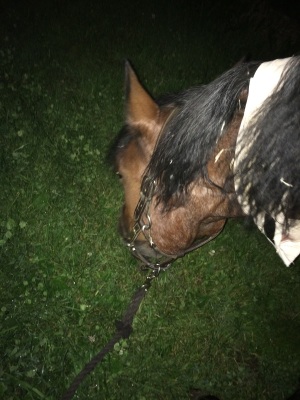 3am checks suck, but they’re better when you know your horse will behave.

Second, things that did not go so well.

The most important of these is that my first aid kit was a bit lacking. I’ve written before about spring cleaning checkups for my first aid kit, but when I sold my trailer I got a little over-confident and slacked off on checking regularly. The barn has ample first aid supplies, and I knew I could fall back on them if I needed to.

Well, I needed to. The most egregious thing I had never replaced was my roll of Elastikon, that miracle fiber. I had to buy some from the vet, at a premium, and then I didn’t have any to replace/update the bandage for his IV, so we resorted to over-taping it with duct tape. It worked ok, but it was considerably less than ideal.

I also quickly discovered that one my thermometers had a dead battery, that my paste banamine had expired, and that things in the kit itself were in disarray – I’d bought a box of new gauze, for example, and had just shoved it in the box instead of fitting it in neatly. When you’re panicky and looking for supplies, you’re already going to make enough of a mess. It doesn’t help for things not to be orderly to start with!

So, terrible job to me. I’ve rectified the most urgent pieces of this – new Elastikon, new thermometer battery, new banamine – but I need to spend some quality time looking through the kit and re-evaluating each piece of it and either upgrading or downgrading things now that my situation has changed slightly. I did spend some downtime going through my tack trunk and throwing away expired and empty things, but need to allocate more time to this soon. 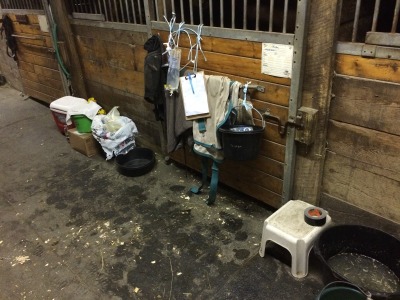 Other things:
– My mental state was…not great. I’m really embarrassed that I basically had a meltdown at 3am about the bubbles in the IV line. Horse care and on the ground handling is one of the things I take pride in, and am generally very competent at. It was really frustrating that my anxieties took over my brain and prevented me from doing the best job that I could. Yes, I was sleep-deprived and terrified and doing new and tricky things, but I still let myself and a lot of people down. I need to either be more ruthlessly honest with myself OR find ways to work through that much better. Preferably the latter; I think of myself as someone who’s good in a crisis and I need to do more work to keep that up.
– My emergency fund is in shambles. I’ve been dipping into it a little too freely lately, for really-wants rather than actual emergencies. Yes, it was more than adequate to cover the cost, and yes, I have had a lot of really bad financial challenges this spring/summer, but I can and must do better about building this back up.

Finally, what can I do better?

– Commit to more regular cleanouts/checkups on the first aid kit.
– Work on some anxiety-reducing techniques that aren’t just crash-and-burn-and-sleep-like-the-dead.
– Build the emergency fund back up: no more discretionary purchases. At all.
– Good biosecurity is important even when no one is sick! No more grabbing a brush from the schoolie shelf just because it’s closer and easier than bringing down Tristan’s whole grooming kit.

Do you have any lessons learned from a crisis that you always implement now?

7 thoughts on “Lessons Learned After Illness”