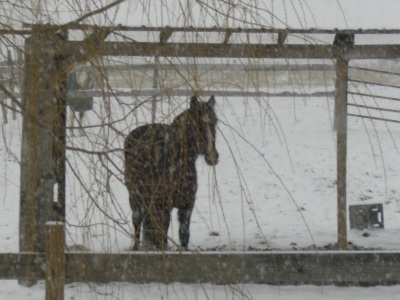 Some years ago, maybe seven or eight, I had a standing weekday dinner with friends at a dive bar in Boston. They had a selection of mediocre chicken sandwiches that were 50% off on Wednesdays, so we went and paid $2.50 per sandwich because we were broke post-college twenty-somethings. There could be anywhere from four to fifteen people there.

One night, conversation turned to a “what if” scenario: would you give up your cell phone permanently if someone paid you a large sum of money to do so?

I didn’t even hesitate: yes, I said, I’d do it, but I’d want to have a pager or beeper or some other method of receiving emergency messages in case there was a problem at the barn with Tristan.

One person at the table rolled her eyes and said, “Or you could just fucking let him die. He’s a goddamn horse.”

Which should tell you basically everything you need to know about that particular individual. (Plot twist! She’s now my sister in law. That’s among the milder things she’s ever said to me, but it sticks out, for obvious reasons. The universe is a cruel and fucked up place sometimes.)

So what I want to know is, are there people like that in your life, who go above and beyond the usual “I don’t get it, horses do all the work and can’t you just give them the night off”? They’ve actively said nasty things, or judged you unnecessarily harshly for the time and money you spend.

17 thoughts on “People who just don’t get it”