I need all of you in southern climates to bite your tongue for a few minutes and try not to snicker too hard at us, ok?

It was 85 degrees yesterday – HOT! The sun was out, and the humidity was up a bit. Proper summer weather for the first time in weeks, maybe a payoff for the 29-degree late frost overnight on the previous Friday. (I take full responsibility for that, I had just planted herbs in deck boxes. Sigh.) 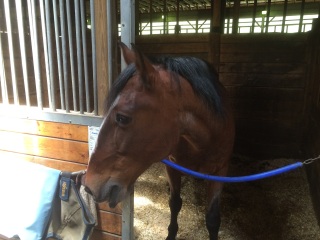 So of course it happened that, on a rare day off, I was at the barn at 12:30, right at the hottest part of the day. Whoops?

In fairness, it was actually a really good time to stop by for a lot of reasons. Tris was inside, and I always try to time my visits to the barn for when he’s inside so I don’t interrupt his turnout. There was a bit of a break in adult camp, which meant that while I groomed I got to listen in on the trainer demonstrating schooling half-steps in the passage and pirouette, and then heard her get feedback from another trainer who works out of the barn sometimes. Super cool.

Then we headed out to march up the hill.

Don’t judge me too harshly when I say that at the end of our walk we were both a little winded and sweaty, ok? I mean, it was like…a  mile and a half. In 85 degree weather.

Yeah, okay, you can judge me a little bit. Does it help if I assure you that it was all either up or downhill on a decent grade?

Tris wasn’t quite sweaty enough that I wanted to hose him off, but he did drink about half a bucket and I hung around for a little while longer to just make sure he was cooling and drying off fine. He was, of course.

I do like the hill walking routine for both of us, though. We’ll keep it up until such a time as I feel like I’ve gotten good answers from the vet and radiologist, and we can start under saddle again. The problem at this point is more that I can’t keep his foot clean while riding – any duct tape booties get shredded after one ride – so hopefully sooner rather than later he can go nekkid again, and conditioning will start in earnest.