In the past few days, the temperature, weather, and my free time have finally coincided again and I’ve had a few good schooling rides. I did not ride with a saddle from December through the first week of January, and I’m pretty pleased with myself for sticking to that. This week, the saddle went back on. 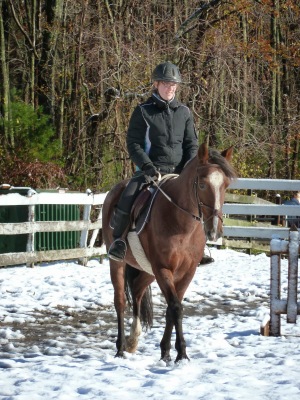 (Taken some years ago, at a different barn. We have 12″ of snow on the ground, sigh.)

I immediately noticed some good things and some bad things about the transition back to a saddle.

My legs were much stronger and steadier as well, particularly in the canter. I was able to really hold him with my outside leg – and yes, ideally he would not NEED me to hold him through my outside leg, but that is a longer term project!

He’s definitely more fit. The interval work for him while I concentrated on my seat paid off. 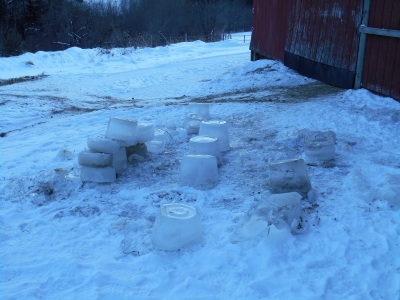 SO COLD. So fricking cold. Whereas before, as we worked and he warmed up, he communicated that warmth right through to my legs and core, now I had a big piece of leather and wood and saddle pad and half pad between me and his warm, warm back. I lost all feeling in the surface of my legs almost immediately, and shivered under my coat until well into the warmup.

It’s more boring, in a way. The 15 minute walk warmup that I do during the winter wasn’t nearly as interesting under saddle, when I couldn’t feel every minute move of his back and hid end. Some people are way more sensitive than I and don’t have that problem, but I’ve never been an intuitive rider in that way.

The girth! Some of this, ok, was the harder level of work + the warmer temps (into the 20s, you guys! HEAT WAVE!), but he was damp around the girth area. Going forward, we’ll see if he sweats when he gets fitter or if I need to extend his clip a bit. I’m actually leaning toward clipping a bit more.