I’ve been thinking about this post for a long time. Probably close to a year. I’ve gotten closer and closer to saying it out loud, writing it down, putting it out there for consumption by the universe.

How do I know when it’s time to retire Tristan?

2015 will come with some big changes, and 2014 had a lot of challenges. Put those two things together and it’s been on my mind more and more. 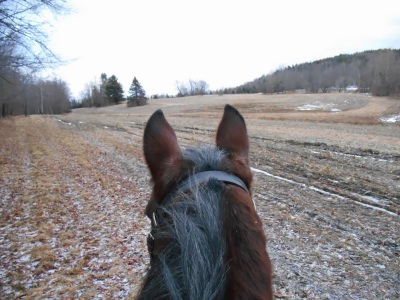 I know a few things for sure.
I don’t want to wait until he is permanently unsound, unhealthy, or unhappy. I don’t want the decision taken out of my hands. I want him to be comfortable and happy when he retires, and I want the option of getting on bareback for a walk around the field with my best friend. I don’t want to watch him suffer.
I want to retire him with me, on my own property. I want him to be there every morning and every night, and when the time comes, I want to bury him somewhere I can visit. I want to do everything I can for him with my own two hands.
I want to keep riding after I retire him. That will mean a second horse, and it will mean I have to bring him home.
I know he will be happy in retirement. He will not be one of those horses who paces the fenceline, who gets jealous when the trailer pulls away without him, who nickers for me to come visit. He has always been very much his own creature. He spent over half his life completely on his own. I know he loves me, but I also know that he does not live for his work. He would be happy to be retired to a field tomorrow.
I’m not ready yet. He needs at least light work to keep him sound and happy right now, until he can have a large field to walk around all day. He needs the physical fitness that quality dressage work provides. It keeps him loose and limber and comfortable. And I’m not ready to stop riding him. He turns 20 this year, and there’s no reason he won’t be sound and comfortable for many years yet, and I need my best friend still.

So what’s next?
I started thinking about this almost a year ago, at the end of last winter. I can remember the precise moment when I relinquished ambition for us as a team – it was at the VERDA ride where I crewed for Hannah last summer. Every other time I’d chatted to endurance/CTR people, and they learned I have a mustang, they’d say “Oh, you should do CTRs!” and I agreed, at least in principle – I really did want to do that with him. Last summer, it was like someone else took over my mouth, and I said, “No, it’s not for him anymore. Maybe my next horse.”
Then at the Vermont Moonlight, someone asked again, and again, it was like someone took over my mouth, and I said “He’s semi-retired now, actually.”
I was surprised to hear myself say that, as it wasn’t something I’d actively been thinking, but I’ve been thinking about it more and more. There’s light work that means you’re rehabbing, or busy in your own life, or planning some downtime. And then there’s light work that doesn’t lead to anything – it’s enjoyable for its own end, but it’s simply keeping you both happy and fit and together.
Sometime over the summer, I realized we were in the second category. I started saying it more often out loud: he’s semi-retired now. He’s older. He’s in light to moderate work. He’s never going to fox hunt, or do a CTR, or event. We’ll do some dressage, we’ll trail ride, we’ll work on being a team together, but I don’t have any goals for us, and I’m okay with that.
So what’s the next step? I don’t know. I’m in a weird in-between place. We’ll keep doing what we’re doing, working on fitness and suppleness and fine-tuning what we’ve always worked on. I’ll keep managing his Cushings, and his foot, and his allergies, and his mental state. I don’t feel an itch to do more. When I start to feel that, maybe it will be time. When I start to feel like he’s nearing another milestone, maybe it will be time.
Until then, stay tuned, I guess.

5 thoughts on “When Should I Retire My Horse?”