We got somewhere between 14″ and 18″ in the snowstorm yesterday. Business more or less as usual. In fact, people were mostly thrilled – good skiing this weekend! Some schools canceled, and for me work closed an hour early when it became clear the snow would impact the evening commute as well. Since I walk to work, I stayed to catch up.

I wish I could ride in it, but we’re heading out of town tomorrow to visit some friends. Hopefully enough will still be there Monday…and I can finagle a way to hold the reins without really using my right hand? Hmmmm.

In the meantime: have a cool photograph. This was taken near Crystal Lake Falls in Barton, VT in 1941. Before snowplows, rolling and/or scraping snow was the order of the day. The idea was not to get ride of the snow but to make it a smoother surface for sleighs to travel on. In the 1940s, Vermont didn’t have an interstate highway system or really even much in the way of paved roads – or electricity. It’s still a very rural place, but not quite like this anymore! 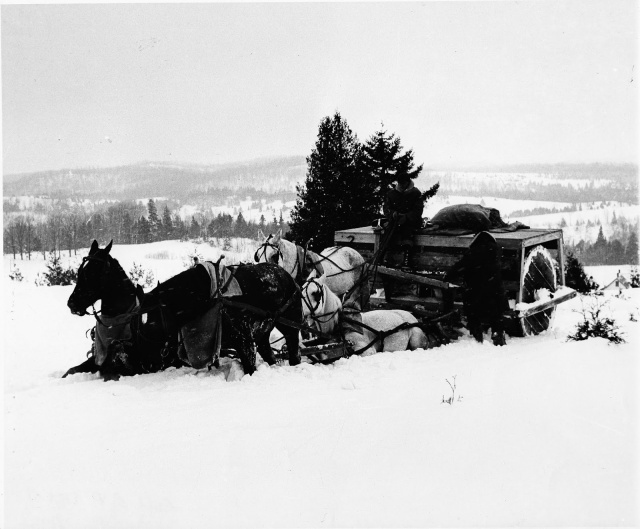 (Photography courtesy of the VT Agency of Transportation/Department of Highways: Vermont State Archives and Records Administration)