When my alarm went off this morning, I regretted signing up for chores the day after Thanksgiving, especially with the temperatures in the low single digits to start the day. Within an hour or two of work I was glad I had, though – my body warmed up with exercise, and it was a good excuse to burn turkey calories.

By the time we finished chores, I felt warmed through and was pleasantly surprised to see that even though I felt like the day was turning nice, it was only 16! I saddled Tristan and worked him for about 25 minutes, not hard, keeping the focus on forward and stretching and bending, and the last 10 minutes or so put on his new resistance band to rev up the work (about which more later; an idea I borrowed from the COTH forums that I think I like quite a lot).

The best part of today, though, hands down? I have to back up a little bit and first apologize for being a shoddy excuse for a blogger: we’ve had a foal in the barn since June and I haven’t once mentioned her.

Her name is Greta, and she was born in early June. Mom is a Hungarian Warmblood, and dad is Gaucho III, an Andalusian. I got to meet her for the first time when she was about ten hours old and I’ve seen her nearly every day since then. She’s beautifully put together, inquisitive, smart, spunky, and fun to have around.

She’s being weaned right now and has been having trouble with turnout buddies, so today they asked if it would be ok for her to to out with Tristan. Tris’s usual response to turnout buddies is to completely ignore them, and he had after all been in a mixed herd when he was wild, so I felt pretty good about his potential behavior.

When we introduced them Greta made baby faces at him – flapping her lips and stretching out her neck – and half-nibbled at his face a bit. He just sighed and stared her down, and only flattened his ears and flipped his head when she actually connected with her teeth. When we let them loose together, he totally ignored her and wandered about his new big field, eating the loose hay on the ground and digging through the snow to get at the withered grass underneath. When she bucked and ran around after her mother was brought in, he picked his head up, sighed, and went back to eating grass. 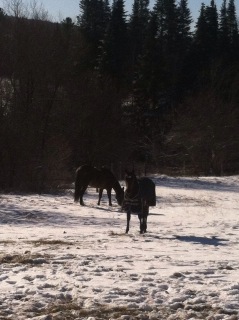 He’ll be babysitting for the foreseeable future. I’m pretty proud of him. 🙂