Well. Not much exciting.

I’m riding, which is in and of itself exciting after the winter/spring we had. So there’s that.

We’ve done about two weeks of a conditioning program. I am an expert at rehabbing this horse now. I spent some time really thinking hard about how to push him, looked for some new tools (reviews coming soon) and we’ve been diligently pursuing trot sets and planned days off since. I’m working him 4-5 days a week, huzzah for that. 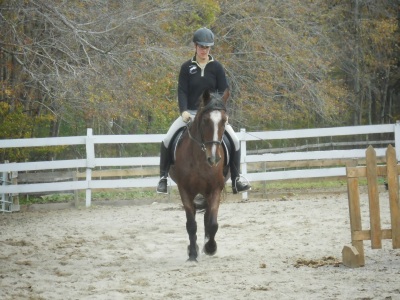 Sunday, I came off. It’s been four days now and I keep getting new and exciting aftereffects: mostly throughout my back, which seems to have re-aggravated an old riding injury. It’s not dire, but it means I’ve been moving more slowly and making my fiance bring up all the boxes from the basement to unpack.

Since then, I haven’t felt up to hijinks, so I’ve been longeing in his chambon. I love that thing. With the understanding that it does really make him use his muscles, I’m longeing for ~35 minutes, then giving him a day off. Probably I will get back in the saddle on Sunday.

The good news is after 40 minutes of longeing on Tuesday, which included canter in which he had to put his damn head down, he was only slightly warm to the touch at the end. It was a muggy, humid day in the 70s, so the fact that he was a) not blowing and b) not warm made me feel good. He was clearly a little muscle-tired, and drank half his bucket when he got back to his stall, but more of a good workout tired rather than an out of shape exhausted.

He’s also in good weight and I like where his topline is headed. I just have to stick to my guns and keep pushing him instead of getting nervous and backing off.